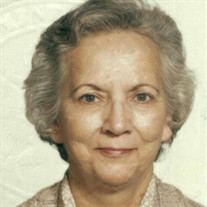 Geraldine Grace Barnard Sly was born February 18, 1926 to Allen Sidney Barnard and Julia May Burgess Barnard. She died March 12, 2020, at her home in Mannford, OK. She is survived by one sister, Wanda Jean Smith-Gile of Muskogee; her daughter Mary Margaret Lasarsky and husband Gary of Mannford; her son George Steven Sly and wife Kandy of Clarksburg, West Virginia; her son Michael Kurt Sly and wife Carla of Alachua, Florida; 7 grandchildren and 10 great-grandchildren. She was preceded in death by her husband George Sly Jr, whom she married on September 4, 1948. She was also preceded in death by her parents, sisters Laura, Rubye, and Joyce, and brothers Floyd and Arlie. Jerry wore many hats, and had a lot of nicknames. She was “Gerald” to her husband George, mom to her kids, Grandma Jerry to her grandkids, and G.G. to her great grandchildren. She was not simply grandmother and great-grandmother, she was an active part of the lives of her kids, grandkids, and greats. All the kids knew her, had a relationship with her, and felt comfortable walking into her house through the garage, saying “YOO HOO!” and getting a Dr. Pepper or Diet Coke and a snack from the fridge. Although Jerry loved spending time with her grandchildren, she absolutely loved her role as G.G. to Reilly Lasarsky, Loston Carley, Nettie Lasarsky, Anya Styles, Lorna Carley, Gentry Green, Asher Styles, Eliza Sly, Bailey Green, and soon-to-arrive Gwendolyn Claire Sly. When they would visit her, they always learned something new, whether it was playing piano, typing on an old Underwood typewriter, or cooking. On Halloweens, all the great grands would go knock and she would open the front door wearing a witch hat and give them handfuls of candy. Jerry was very giving, both financially and with her time and talents. A lifelong member of the Church of Christ, she supported mission work, both local and abroad. She was an active member of the Mannford Church of Christ, and regularly volunteered at the Contact Church of Christ in West Tulsa, helping organize and distribute food to those in need. When it came to food, Jerry could cook! Tacos, fried chicken, cucumbers and onions, sausage casserole and homemade potato salad were a few of her signature dishes. And don’t forget the fried cornbread! Sunday dinners, Thanksgivings, and Christmas dinners were a treat, and she always knew how to cook delicious food no matter how large the crowd. Over the course of their 58 year marriage, Jerry and George loved spending time together (even though he jokingly would tell Erin that she hit him with a frying pan when nobody was around). They worked together to build Flow Measurement Company, and Jerry was able to use her talents in accounting and management to make the business successful. One of their favorite things to do together was travel. They traveled all across the US and overseas, including a tour of Egypt and Israel. Together, their favorite spot was South Fork, Colorado, where they also passed on a love of traveling and the mountains to their family. After George passed, Jerry continued to travel with her family, as well as with her dear friends Cindy and Avis. Jerry visited Turks and Caicos, Hawaii, and the west coast of the United States. She also made numerous trips to Colorado, West Virginia, and Florida.

Geraldine Grace Barnard Sly was born February 18, 1926 to Allen Sidney Barnard and Julia May Burgess Barnard. She died March 12, 2020, at her home in Mannford, OK. She is survived by one sister, Wanda Jean Smith-Gile of Muskogee; her daughter... View Obituary & Service Information

The family of Geraldine Sly created this Life Tributes page to make it easy to share your memories.

Send flowers to the Sly family.