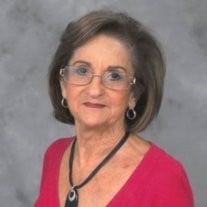 Grace Louise Davis nee Ulmer of Broken Arrow entered her eternal rest on Friday April 12th, 2013. She joins her late husband Kenneth Max Davis and her parents the late Reverend Louis E. and Frieda nee Michalk Ulmer in their heavenly rest. She was born October 28th, 1938 in Houston, Texas and passed away at her home in Broken Arrow surrounded by her loving family.She was married to Kenneth Max Davis on July 10th, 1959 at Zion Lutheran Church in Guthrie, Oklahoma by her father the Reverend Louis E. Ulmer. Married for 43 years their union was blessed with two children, Roxann Renee Hulsey of Broken Arrow and Dr. Randall Louis Davis Tulsa.She graduated from Guthrie High School in 1957 and Oklahoma State University with a teaching degree. She taught elementary school in the Hazelwood, MO school district and the Coweta, OK school system. Her love was teaching 4th grade and avocation was science. She was nominated Oklahoma Teacher of the Year and was awarded Teacher of the Year in the Coweta Public Schools. She taught in Coweta from 1981-2012.She was president of her HOA where she lived and a life long member of the Republican Party. Grace was the number one supporter of all of her children and grand children’s activities.She worshiped regularly at Our Savior Lutheran Church in Tulsa, was a founding member of the Outback Club, sang in the choir, worked with the Altar Guild, Braille Ministry and Meals on Wheels.She is survived by her two children Roxann Renee Hulsey and Dr. Randall Louis Davis and his wife Tricia. She was blessed with six grandchildren Jackson, Hannah, Savanah, Avery, Jessica and Daniel. She is survived by her four sisters and their spouses; Eudora Taylor of Marion, IN, LaVerne Rauh of Wentzville, MO, Gloria Fischer of Indianapolis, IN and Diana Antal of O’Fallon, MO and numerous nieces and nephews.She will be dearly missed by her family, loved ones and friends.

The family of Grace Louise Davis created this Life Tributes page to make it easy to share your memories.