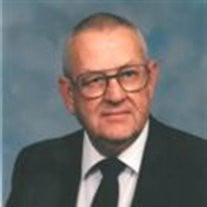 Gene was born to the late Herman and Bertha Bowker on December 20, 1930. He graduated from Kaw City High School in 1948. On May 22nd of 1949 he married Bartie Ann Hunt. Their 64 year marriage became an exemplary testament to faith and selfless devotion to one another and a fervent commitment of love and care for their children. Gene’s life comprised those enduring qualities that gave an individual’s life immeasurable meaning and value to those that knew and loved him. Although we are all familiar with the preeminent sports manufacturer’s slogan “Just Do It”, Gene’s life could be summarized with just a short extension…”Just Do It Right” and “Right” is how he did it. If he fixed it there would be no shortcuts. It would last forever. If he was in charge it would be carefully looked after. What he loved was safe and sound. Gene rose through the ranks of the oil industry as a Production Foreman and Area Superintendent. His long career consisted of employment with Kewanee, Gulf and Chevron oil companies. Personal attainment was not his focus. He would readily say his greatest achievement was having no loss of life regarding the crew and personnel he supervised. This was accomplished by not only “doing things right” but on several occasions by selflessly exposing himself to harm in order to save another. These enduring paternal and protective qualities were ever present for his family who enjoyed the warmth, safety and security provided to them from this good man. At 11:00am on Tuesday, January 7, 2014 this disciple of Christ was called into a warm loving light. He most assuredly experienced the unspeakable joy of hearing the words “Well done thou good and faithful servant”. To those of us left behind who will deeply miss their loving husband, Dad, and Grandpa and friend we remember his precious life and simply and humbly echo those eternal words “Well Done”. Well done indeed! Gene is survived by his wife Bartie Ann Bowker; his son Brian D. Bowker and wife Lorie of Bismark, North Dakota; two daughters Beverly Fitch of Broken Arrow and Barbara Monjaras and husband Ed of Albuquerque, New Mexico; two sisters Betty Murphy of San Antonio, Texas and Doris Wilgus of Ponca City, Oklahoma; 6 grandchildren and 7 great-grandchildren.

Gene was born to the late Herman and Bertha Bowker on December 20, 1930. He graduated from Kaw City High School in 1948. On May 22nd of 1949 he married Bartie Ann Hunt. Their 64 year marriage became an exemplary testament to faith and selfless... View Obituary & Service Information

The family of H. E. “Gene” Bowker Jr. created this Life Tributes page to make it easy to share your memories.

Gene was born to the late Herman and Bertha Bowker on December...