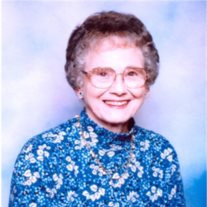 Helen Tina Moore Corlett passed away September 11, 2013 in Tulsa, Oklahoma. To those who knew and loved her she was “Tina”. Tina was born September 9, 1924 in St. Joseph, Missouri to William A. Moore and Blanche C. (Wilber) Moore. Most of her young life was spent in Burlington, Iowa where she married Herbert B. Corlett on October 5, 1942. They had one daughter, Margret Susan Corlett. Tina was blessed with an “angelic” voice and during the 1950’s she was a promising radio and TV singer. Her singing career continued as soprano soloist at East Side Christian Church where she was an active member. Tina served as secretary for twelve years at Rogers Heights Christian Church before resigning in 1965 to take a position at First Christian Church where she was secretary to the ministers for over thirty years. She is survived by loving family members, brother-in-law Ronald Miller of Bonner Springs, Kansas, sister-in-law Mrs. Robert (Phyllis) Miller of Richland, Washington, three nephews, four nieces, their families and many friends. She was preceded in death by her parents, a brother, two sisters, a nephew, her husband and daughter. A celebration of Tina’s life will be held at 10:00 am on September 23rd at East Side Christian Church, 1438 S. Indianapolis Avenue, Tulsa, OK 74112. In lieu of flowers memorials may be made to East Side Christian Church. Interment will be at Fort Gibson National Cemetery, Fort Gibson, OK. Condolences may be made at www.floralhaven.com

The family of Helen M. Corlett created this Life Tributes page to make it easy to share your memories.