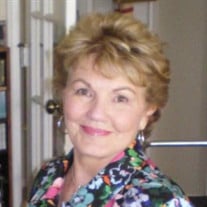 Helen Della Dooley was born on September 22, 1928 and went to be with the Lord on June 27, 2021. She lived the full life of an adventurer and is remembered by her family and friends. Born to Albert and Veidi Johnson, Helen grew up under the given name of Nellie Evelyn Johnson on a Cotton Farm near Corinth, Mississippi. She had one sister, Dortha Rea, who died in infancy, as well as two younger brothers Tommy and Jerry. Tommy passed away in 2019, however, Helen is survived by her other brother, Jerry Johnson. On the farm, Helen grew up playing outside, and watching over her younger siblings. It was during this time that she probably began developing her great love of flowers and birds. Helen was known for being an avid gardener, as well as bird watcher and could often be found on her back porch admiring the nature around her. Helen married at a young age and had two beautiful children, Jeanie and Hollace Glenn. Helen remarried Edwin Lawrence Dooley in 1974 and remained married until his death in 2006. Initially, they lived in the Atlanta, Georgia area. In 1975, they relocated to Tucson, AZ and remained in Tucson several years. Ed was a retired US Air Force Officer and wanted to be near an Air Force Base. He also had children living in Tucson. Helen and Ed stayed in Tucson until the late 70’s then relocated to Columbus, Mississippi. Helen’s parents still lived nearby in Corinth, Mississippi. After a short year, they relocated back to Tucson and remained in Tucson until 1984.In 1984, Helen and Ed moved to Broken Arrow, Oklahoma. Ed suggested it would be good for Helen to be near her daughter, Jeanie Campbell, and her husband Greg and their daughter, Helen’s granddaughter, Amber. Amber now lives in the Austin, Texas area and has three wonderful children Azure Hardin (19), Aidan Steel Hardin (17), and Alastair Sterling Hardin (15). Helen and Ed lived mostly a quiet life. Ed stayed busy conducting research and writing about Native American history, as well as the Israeli and Palestine histories. Helen took up painting as a pastime. Helen’s love for painting is evident in her work as her passion evidently shines through in the beauty and detail of her final products. Many of the paintings still hang in the halls of her loved ones’ homes. Helen was also an amazing chef and could whip up excellent southern meals and soups. Ed was also an excellent cook and his specialty was food from his native New York City, especially gourmet sandwiches. Helen and Ed both enjoyed sampling new restaurants. Both were involved in Barbershop Quartet events, where Ed enjoyed singing as a baritone member. Helen and Ed were also known to go to the horse races for fun on occasion. Helen enjoyed traveling and she and Jeanie took several ocean cruises. Helen also would travel with Ed’s sister Kathleen as well as with Greg’s Mother Martha. In addition to these hobbies and activities, Helen was an excellent hostess. She was often described as a socialite and absolutely adored throwing parties and hosting guests. She was always ready to have fun and spend time with the people around her. In this way, her southern roots fully showed through. She was the picture of a southern belle in charm, beauty and feisty attitude. Helen was a very social woman and through her whole life made friends easily and was adored by those who met her. One of her most obvious characteristics was her undeniable beauty. Helen was absolutely stunning from youth all the way through her seasoned years. There was hardly a day when she wasn’t complimented on her youthful skin, perfect hair, or unique fashion. Helen prided herself on this uniqueness as well as her resolute strength. She was raised with fiery southern roots and she held to her opinions and convictions with energetic passion. After many happy years spent together, Ed passed away in 2006. Between 2009 and 2011 Helen met and married Norval Ray Rose whom Helen referred to as Ray. Helen and Ray met through a dating website and quickly became best friends and adventure buddies. They spent their years of marriage traveling across the country taking multiple trips to Honolulu, Hawaii, Alaskan cruises, Yellowstone National Park, and Branson, Missouri. They were an extremely generous couple and loved to bring family from both Helen and Ray’s sides of the family on these trips with them. During this time of traveling, Helen and Ray were still living in Broken Arrow, Oklahoma and were able to spend time with Helen’s daughter Jeanie and her grandchildren and great-grandchildren. In 2016, Helen and Ray moved to Melbourne, Florida to be closer to Ray’s daughter Linda Brandon, her husband Tom, and their children Zachary and Kylee. Helen and Ray enjoyed their time in Florida and enjoyed many visits from friends and family. While living in Florida, the couple filled their time with family dinners, local restaurant exploration, beach get-aways and pleasant afternoons in their backyard gardening and bird watching. Upon her passing, Helen shared sentiments of love for her entire family as well as her close friends whom she cared for deeply. She emphasized that her passing was not reason for sorrow, but instead for celebration, because she was going to be Jesus. Helen was very anticipatory of the perfect eternity that awaited her and she went peacefully and joyfully into her Savior’s loving arms. Helen is survived and remembered by many family members including her husband Norval Ray Rose, brother Jerry Johnson, daughter Jeanie Campbell, son-in-law Greg Campbell, granddaughter Amber, great grandchildren Azure, Aidan and Alastair, step-daughter Linda Brandon, son-in-law Tom Brandon, step daughter Lee Anne Simmons, and grandchildren Christopher Samra, Zachary Brandon, Kylee Brandon, as well as niece Pam Johnson Hudson , nephew Michael Johnson and niece Jill Steelman. Helen was a very special woman who loved ferociously and lived adventurously. She is remembered with peace, joy and love.

Helen Della Dooley was born on September 22, 1928 and went to be with the Lord on June 27, 2021. She lived the full life of an adventurer and is remembered by her family and friends. Born to Albert and Veidi Johnson, Helen grew up under the... View Obituary & Service Information

The family of Helen Della Dooley created this Life Tributes page to make it easy to share your memories.

Send flowers to the Dooley family.