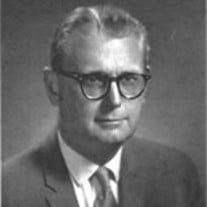 Jack Spears died on July 16, 2012. He was born on December 23, 1919, in Fort Smith, Arkasas, the son of Clifford G. and Josephine Spears. In 1935 the family moved to Fayetteville, Arkansas, where Jack graduated with honors from the University of Arkansas in 1941, majoring in both business administration and journalism. Jack was then employed for several months as General Manager of the Wagoner (Oklahoma) Chamber of Commerce. In December, 1941, he was named Executive Director of TulsaCounty Medical Society, a post which he held until his retirement in 1985. During his 44 years with the organization, the Society grew from 110 to over 1,000 physician members, and was a major force, along with other groups, in many significant professional and community projects. These included co-sponsorship of the mass immunization of Tulsa County residents for poliomyelitis in 1962; the establishment of the University of Oklahoma-Tulsa School of Medicine in 1972; co-sponsorship of the Red Cross Blood Center, which opened in 1949; formation of the Scholarship Fund of Tulsa County Medical Society, providing financial assistance to area medical students; creation of Tulsa County Medical Foundation to establish a charity clinic in La Mothe, Haiti, staffed by physicians; and innovative pubic relations programs that included several long-running television and radio programs, community health fairs, an award-winning monthly magazine and other publications, and extensive postgraduate training programs for doctors. Jack was a former member of the Board of Directors of the American Association of Medical Society Executives, and served at various times on the governing boards of many voluntary civic and health organizations including Tulsa Medical Education Foundation, Arthritis Foundation of Eastern Oklahoma, Tulsa Center for Prevention of Child Abuse, Tulsa County Public Health Nursing Association, and Better Business Bureau of Tulsa. He was an active worker in more than 40 annual campaigns of Tulsa Area United Way, serving on its budget committee for several years, and was a member of Boston Avenue Methodist Church. Jack was honored by Oklahoma State Medical Association, receiving its Distinguished Service Award in 1980 and the prestigious Outstanding Layman Award four years later. He was also named an honorary member of OSMA in 1989. Among other honors were the Amicus medicine Award of the University of Oklahoma School of Medicine Alumni Association in 1986 for helping to bring the OU-Tulsa medical college to reality; two awards by the Salvation Army of Tulsa for his work in summer camp programs for underpriviledged children; and a distinguisehd service award by Tulsa Area American Red Cross in 1986 for services in the establishment of its blood program. At the time of his retirement Jack had the longest tenure of any medical society executive in the United States, for which he was recognized in special ceremonies before the House of Delegates of American Medical Association in Washington, D.C. Jack was a dedicated film buff and achieved a national mreputation as a motion picture historian. He was the author of two books, “Hollywood: The Golden Era” and “The Civil War on the Screen,” and numerous magazine articles on motion picture history and criticism (including a study of films about Oklahoma for the Oklahoma Historical Association). His work has been quoted or credited in more than 200 books and other publications in the United States, England, France, Belgium and Italy. As part of this hobby, he collected hundreds of silent and early talking films, books and other movie memorabilia. At the University of Arkansas Jack met Helen Jeanne Jackson of Harrison, Arkansas, and they were married in 1942. After raising two sons, Helen sold real estate for thirteen years, and subsequently earned a new reputation as the author of six romance novels and numerous magazine articles. In addition to Helen, survivors include Jack Spears, Jr. and wife Bonnie, Falls Church, Virginia; Richard T. Spears and wife Vickie, Tulsa; granddaughter Dr. Leslie Ann Spears, Tulsa; and great-granddaughter Audrey Chapman, Tulsa.

Jack Spears died on July 16, 2012. He was born on December 23, 1919, in Fort Smith, Arkasas, the son of Clifford G. and Josephine Spears. In 1935 the family moved to Fayetteville, Arkansas, where Jack graduated with honors from the University... View Obituary & Service Information

The family of Jack Spears created this Life Tributes page to make it easy to share your memories.