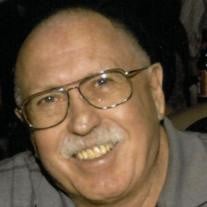 James ” Jim ” Ralph Asbill, 70, passed from this life on Thursday, December 6, 2012 in Tulsa, Oklahoma. Jim was born in Sallisaw, Oklahoma on May 22, 1942 to Price and Asia Asbill. He was preceded in death by his parents; and brothers, Merle Glenn Asbill, Doyle Peters, Floyd Peters and Bill Peters. He is survived by his wife, June C. Heydorf Asbill, of 53 years and daughters Cynthia and husband David Prado, Barbara and husband Zach Coffee, grandchildren LaShell and husband Mike Berger, Danielle and husband Jarrod Jenkins, Michael Prado and great-grandchildren Wyatt, Kayden, Dylan and Lillian.53 years ago, Jim started his life with June in California, where they raised two daughters with love and youthfulness. Together, they made a life of wonderful memories and a great childhood for their girls. In 1972, they decided to move their family to Oklahoma, in later years they were blessed with grandchildren and great grandchildren, who he loved dearly.Jim was a loving and dedicated husband, father, grandpa and great grandpa. He was extremely proud of his family. He had a kind heart that would help anyone he knew, as well as those who were strangers. Jim was a proud supporter of the second amendment. And, he had became an avid shooter and thoroughly enjoyed going to the gun range with his grandson, Michael. Jim has left a great legacy behind and will be missed by all of the people who knew him. He so dearly loved his family and would want them to move forward, together. Cherish all the great memories, live life like there’s no tomorrow and, most of all; stick together as a family!

The family of James Ralph Asbill created this Life Tributes page to make it easy to share your memories.