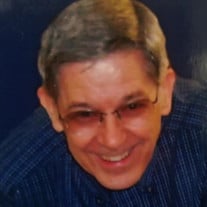 James Cury Jr. age 88, of Tulsa, Oklahoma passed from this life on August 18, 2021 at Clarehouse hospice. He was born November 13, 1932 in Hartshorne, Oklahoma to James Cury Sr. (formerly known as Jamil Kouri Yousef Dababneh) and Pearl Edna (May) Cury. He grew up in Hartshorne and often helped in the family dry goods store. He obtained a bachelors degree in Business Education at Northeastern State University in Talequah, Oklahoma before serving in the Army from 1954-1956. On February 1, 1957 he wed Mary Anne Vaughan. They were married for 53 years before her passing in 2010. Jim began his career at National Tank Company while residing in Sand Springs, Oklahoma. He then moved to Tulsa to spend the rest of his career as a history teacher at Skelly Jr. High. He enjoyed volunteering in Boy Scouts and at his church. Jim is survived by his two children, Cheryl Anne Prichard and her husband, Wes of Colorado Springs, Colorado, and James Mark Cury of Tulsa, Oklahoma; two grandchildren, April Prichard of Redondo Beach, California and Emma Prichard of Portland, Oregon. He was preceded in death by his parents, his wife, and one brother, Ralph Joe Cury. Graveside services are set for 1:00 p.m. on Thursday, August 26, 2021 at Oak Hill Cemetery in McAlester, Oklahoma.

The family of James Cury Jr. created this Life Tributes page to make it easy to share your memories.

Send flowers to the Cury family.