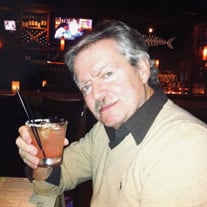 James Michael Godwin, son of Thomas H. Godwin and Betty Lou Russell of Ponca City Oklahoma went to the big jazz concert in the sky on January 22nd 2020. He was loved and will be greatly missed by his family including his daughter Quenby Partridge, son in law Eric Partridge, granddaughter Sophia Partridge and grandson Caleb Partridge of Oakton Virginia, his former wife Aletha Langham (Rags) of Hiawassee Georgia; his sister Candy Portman, niece Stephanie Portman, niece Stacey Gordon and husband Donnie Gordon and their son Graham Gordon of Tulsa Oklahoma. Jim grew up in Ponca City, attending Ponca City High School and later Wentworth Military Academy in Lexington Missouri. It was at this time that he developed a love for jazz music and playing the drums which he continued to do throughout his life. He later attended Central State College in Edmond Oklahoma, followed by Oklahoma City University where he received his law degree. Jim had many names, Jimmy Mike to his mother, Jimbo to his family, Dadoo to his daughter and Jams to his grandchildren. He loved to read about and research obscure topics, discussing them excitedly with family members and friends. He enjoyed swimming in his pool and having a glass of wine and a cigar while listening to the crickets in his backyard. Jim spent many evenings at the Cigar Box recounting his treks all over the world, endearing himself to all of the patrons and staff who preferred his company and fantastic stories to a big tip. Jim was an avid collector of art, reading glasses and cigar cutters who played drums in his kitchen while eating what could only be described as “curious” cuisine. To know Jim was to love him, his eternal youthfulness and unfailing positivity made him so very rare and irreplaceable in this big crazy world. He was an amazing conversationalist who could talk to anyone about anything and be extremely entertaining while doing so. He was a wonderful father, who loved his daughter once describing her as a majestic unicorn that he enjoyed observing from afar. He was a loving big brother, traveling companion and best friend to his sister. Jim loved his family, Jim loved life and he lived out every day with spirit, spunk and excitement. He made us all laugh…he made us smile…he will never be forgotten and those that had the pleasure of knowing him were blessed beyond measure. If you would like to make a contribution in Jimbo’s memory, please donate to the PAMS foundation at pamsfoundation.org. The PAMS foundation is a non-profit conservation organization that protects endangered species and environments and promotes awareness of the value that wildlife and wild places have for our planet.

James Michael Godwin, son of Thomas H. Godwin and Betty Lou Russell of Ponca City Oklahoma went to the big jazz concert in the sky on January 22nd 2020. He was loved and will be greatly missed by his family including his daughter Quenby Partridge,... View Obituary & Service Information

The family of James "Jim" Godwin created this Life Tributes page to make it easy to share your memories.

Send flowers to the Godwin family.