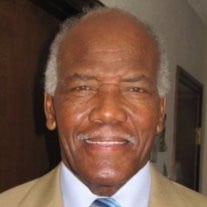 James M. McDaniel, Jr. Civil Engineer (Retired)James M. McDaniel, Jr., a native of Hearne, Texas, graduated from Blackshear High School in 1954. He attended Prairie View Agricultural and Mechanical University on a partial football scholarship for one semester, and enlisted in the US Army January 1955. He served in the 10th Reconnaissance Company of the 10th Infantry Division (10th Mountain Division), and was Honorably discharged January 10, 1958. After his discharge, he again enrolled at Prairie View in January 1958 and attended through the spring semester of 1959. After a short stay as a non-student, he enrolled at Prairie View in the fall of 1961 and graduated with a Bachelor of Science Degree in Civil Engineering in 1964. After graduation, the Galveston District of the US Army Corps Engineers employed him as a Civil Engineering Trainee.During his tenure with the Galveston District, he completed a one and one half year Training program. After completing the training program, they assigned him to the Projects Reports Section as a Civil Engineer where he worked until he transferred to the Tulsa District in December 1966. He remained with the Tulsa District of the US Army Corps Engineers until he retired on January 3, 1997.As a Tulsa District Civil Engineer, he managed General Investigation (GI) studies and coordinated the District’s Planning Assistance to States (PAS) program activities. He also served as the Lead Technical Manager for Military Master Planning. He Prepared annual budget documentation, scopes of work, cost estimates for contract work, and monitored study expenditures for Federal and Sponsor activities for both GI reconnaissance and PAS studies. He coordinated these studies with appropriate Project/ Study Manager and other State and Local officials and Military personnel.Mr. McDaniel received his Master of Civil Engineering Degree from Oklahoma State University in 1974. He was registered as a Professional Engineer in the State of Texas in 1975. The Board of Engineers for River and Harbors certified him as a Water Resources Planner in 1977, after he completed a year of resident study at Fort Belvoir, Virginia. He was a member of The Society for American Military Engineers.Additional activities included serving as an engineering instructor at the Tulsa Community College during the spring semesters of 1980, 1981, and 1982.He is survived by wife Gisele McDaniel, Tulsa OK and their daughter Angelene McDaniel, Seattle, WA. He was the father of four children from a previous union, Douglas McDaniel & Tara with family, of Washington, DC, Edith McDaniel and Brook Ennis, Dallas, TX area, Kathy McDaniel, Dallas, TX area, James & Lorri McDaniel, Dallas, TX area, Also, Lee Hunter of Lubbock, TX; Siblings, Norris & Mary McDaniel of Hearne, TX, Doris & Joe Lee, Houston, TX, and Myrtle Ford, Houston, TX; Step Sisters, Helen, Jane Marie and Joanne and their families of Lubbock, TX.Visitation will be 12:00 pm to 8:00 pm, Friday, September 6th, Floral Haven Funeral Home.Funeral Service will be 10:00 am, Saturday, September 7th, Floral Haven Funeral Home Chapel, Broken Arrow with committal to follow.

The family of James Madison McDaniel Jr created this Life Tributes page to make it easy to share your memories.