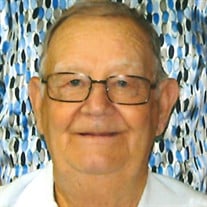 JC Bevard Jr, 83, went to be with the Lord on September 18, 2021. He was born on December 2, 1937, in Tulsa, Oklahoma. He is survived by his children: Debra, and Bill, Weir; Janet, and David, Osborn; Michael, and Tracy, Bevard; and Kathy, and Larry, Paige; along with grandchildren Jason, Niko, Elkie, Pam, Steven, Christopher, Trisha, Trevor, Makenzie; and several great-grandchildren, nieces, and nephews; as well as his sister Carolyn Wolfe. He is reunited with his wife Grace Lavahn Bevard; his parents; his granddaughter Faith Paige; and his sister Shirley Custer.

The family of JC Bevard JR created this Life Tributes page to make it easy to share your memories.

Send flowers to the Bevard family.