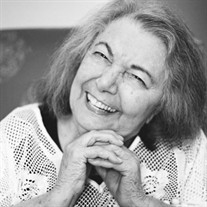 Jean Rose Bair was born July 21, 1932, to Angelo and Rose Puopolo in Boston, MA. She was the older sister to Joseph, Phillip, and Angelo Jr. Her family moved to Baltimore, MD where Jean attended high school and then went to work for the Social Security Administration. It was there that she met Thomas Bair whom she married on October 29, 1960. Tom and Jean built their family in Baltimore as they were blessed with Angela Rose, Thomas Ray Jr., Daniel Ray, and Kirsten. Working for the government, Tom was transferred to Virginia and then to Philadelphia, where the family settled down across the river in New Jersey and established their home. It was there that Tom and Jean decided to send the kids to Sunday school at the local Methodist church so they could go out to breakfast on Sunday mornings. Through the diligent work of the pastor, Jean came to know Jesus Christ, and Tom rededicated his life to the Lord. Jean’s faith in God would define her life. She began to read the Bible and learn all she could through the church, books, and Christian radio – which played in the family home every day. Jean had a passion for prayer and ministry to other women, which she pursued through the women’s prayer group at St. John’s Methodist Church, as president of Women’s AGLOW Fellowship, and later as a prayer leader in Women of Worth at Kirk of the Hills Presbyterian. Tom and Jean were both leaders in the Lay Witness Mission Movement in the Methodist Church and a couples’ ministry called Marriage Enrichment. Jean’s primary mission in life was to care for her family and disciple her children in the faith. She prayed for each child, she encouraged them and made sure they had a personal relationship with Christ. Whether they were home or living far away, each child knew that mom was always there, always praying for their success and ever ready to provide wise counsel or a listening ear. Jean was also a fantastic cook, and her gift of hospitality made the Bair home a haven for family, friends, and anyone who needed a good meal and a word of encouragement. After Tom’s retirement, they moved to Wisconsin to work as house parents at Rawhide Boys Ranch, where Jean used all of her gifts to pour into teenage boys who really needed to see the love of Jesus lived out. Five years later they retired to a small country home in the Upper Peninsula of Michigan where Jean continued to minister to women and pray for her family. In the final years of her life, Jean and Tom moved to Tulsa, OK where their son Dan is a pastor. In the final months, she lived with her daughter Kris and her family, who cared for her as she prepared to meet Jesus face to face – which happened on November 14, 2020. The family will have a private service because of the Covid-19 crisis, with the possibility of a memorial service at a later date. In lieu of flowers or memorial gifts, Jean would like you to take your family out for a meal and enjoy the ones you love. She will be missed by her children: Angel and Phil Mastroeni, Tom and Patty Bair, Dan and Leda Bair, Kris and Jim Eddy, and her eight grandchildren – Philip, Michael, Tom, Alicia, Gabby, Tim, Josh, Abby, and their families. She leaves behind two brothers, Phillip and Angelo, and a whole host of friends. We all eagerly await her greeting when we arrive at the end of our journey. See you soon, Jean!

Jean Rose Bair was born July 21, 1932, to Angelo and Rose Puopolo in Boston, MA. She was the older sister to Joseph, Phillip, and Angelo Jr. Her family moved to Baltimore, MD where Jean attended high school and then went to work for the Social... View Obituary & Service Information

The family of Jean Rose Bair created this Life Tributes page to make it easy to share your memories.

Send flowers to the Bair family.