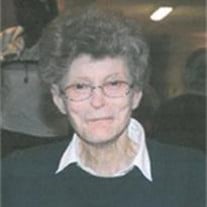 Jerri Couch, 87, Tulsa, Oklahoma, Born September 13, 1924 in Sallisaw, Ok. Passed September 3, 2012 ten days before her 88th birthday. Jerri married John Crockett on August 4, 1941 and they became parents to three beautiful daughters. Jerri was strong and independent, a woman well ahead of her time. As a single working mother, she raised her three daughters.Â  She was a retired PBX operator and also worked as an LPN, bus driver, and real estate agent. She was a great cook and enjoyed fixing Sunday dinners for her family. She loved to travel and visited many places around the world. She enjoyed square dancing and riding her own dirt bike even into her later years. She had an adventurous spirit! She wanted to leave her daughters something to remember her byâ?¦ the life she lived is the greatest memory for her daughters and for all who knew and loved her. She will be greatly missed, always loved, and never forgotten. Jerri is preceded in death by her parents, Carrie and Percy Rose, Brother Wallace Rose and daughter Mary Bowman. She is survived by daughter Helen Lloyd, Daughter and son-in-law Carol and Mike Park, brother Pete Rose and sister Thelma Reed as well as grandchildren Michael and April Meadows, Tosha and Kevin McDougal, Jeff and Jenny Park and Jamie Park and eight great-grandchildren along with a host of loving nieces and nephews. Visitation will be 12:00 pm to 9:00 pm, Thursday, September 6, 2012, Floral Haven Funeral Home, Broken Arrow. Funeral Service will be 10:00 am, Friday, September 7, 2012, Floral Haven Funeral Home Chapel, with committal service to follow at Floral Haven Memorial Gardens, Broken Arrow.

The family of Jerri B. Couch created this Life Tributes page to make it easy to share your memories.