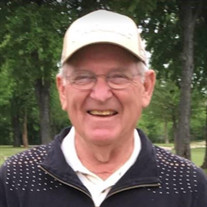 Jerry Thomas Goss, Sr., 81, passed away on Monday, November 23, 2020 in Tulsa, Oklahoma. Jerry was born on June 8, 1939 in Southwest City, Missouri to Thomas Jefferson and Clara Opal Goss. Jerry was one of eight kids the couple had (Bert, Sammie, Mary, Charlotte, Donna, Diana, Larry, Jerry). Jerry was married to Virginia Dianne Manning on March 31, 1961. They have three children Stephanie Lynn, Jerry Thomas Jr., and Wesley Bronson. They have nine grandchildren Jeremy, Amber, Colton, John, Peyton, Jansen, Cade, Karlie, and Casey. They also have six great grandchildren Christian, Callie, Cameron, Caton, Rayvan, and Phoenix. Jerry grew up in Southwest City, Missouri. Spending his childhood with many brothers and sisters, be it swimming in the creek, sharing shoes to play basketball or scaling telephone poles and buildings to catch a chicken or turkey for his family when the Mercantile would turn them loose in the streets on Saturday mornings. He loved riding on the heavy equipment his Dad operated, especially road graders. Worked the Kansas wheat harvest as a teen. Early in his life he grew fond of fast cars, not worried about the looks, just fast. Cool, fast cars were the early common dominator for Jerry and Dianne. Jerry proudly served as an Airman 2 in the United States Air Force from 1956–1960. During this time he was also involved in rodeoing, riding bareback horses and bulls. He moved to Tulsa in 1960 to pursue his love for Dianne at which time he became an original member of the Tulsa Piston Pusher’s Car Club. Jerry and Dianne were longtime faces of stock car and quarter midget racing in the Tulsa area. Jerry was a pit crew member of Emmett Hahn’s #33 and Benny Taylor’s #00. He drove a modified stock car for one season and spent two seasons as the Flagman at the Old Tulsa speedway in the 60’s. He coached numerous baseball and wrestling teams of his sons in the 70’s and 80’s. Jerry and Dianne moved the family to Catoosa in the mid 70’s where his love for country living and horses was apparent. He was an avid member of the Oil Capital Riding Club for years. Jerry and Dianne also had a love for the lake and camping, where he taught many family friends how to water ski with his jet boat. Jerry and Dianne logged many hours traveling and watching their sons and grandsons participate in football, baseball, wrestling, and horse racing all over the country. He spent his professional career at Public Service Company of Oklahoma in Tulsa. For most of his time there he was a Journeyman/Lineman. He retired in 2000. After retirement he spent nearly all his time on the golf course. He and Dianne were longtime members of Broken Arrow Golf and Athletic Club where at least one of them could be found almost every day. They traveled the country playing golf with great friends. In addition, his passion for hot rods and car shows was rejuvenated with his purchase of a 1929 Model A Ford sedan for which he won many awards as well as his newest addition, a 2019 Ford Mustang Bullitt. Funeral service is pending.

Jerry Thomas Goss, Sr., 81, passed away on Monday, November 23, 2020 in Tulsa, Oklahoma. Jerry was born on June 8, 1939 in Southwest City, Missouri to Thomas Jefferson and Clara Opal Goss. Jerry was one of eight kids the couple had (Bert,... View Obituary & Service Information

The family of Jerry Thomas Goss Sr. created this Life Tributes page to make it easy to share your memories.

Send flowers to the Goss family.