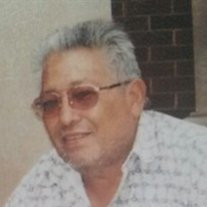 Jesus “Jesse” Aguero, Jr., 70, formerly of Tulsa, OK passed away on August 22, 2013 at the residence of his daughter in Hulbert, OK. Jesse, as he was known to many, was born on December 27, 1942 to Jesus Aguero, Sr. and Maria Elvira Aguero (Garcia) in Knox City, Texas where he and his three siblings Lidia Paquette of Tulsa, OK, Lucy Watkins of Canton, Ohio and their late brother Guadelupe Aguero grew up before moving to Altus, OK. While living in Altus he met the love of his life Marilyn Gale Spottedbird and were married on May 4, 1964. They were later blessed with four daughters, Joann Aguero Kirby of Tulsa, OK, Carmela Aguero of Tulsa, OK, Laurie Tatum Aguero of Hulbert, OK and Mary Emma Aguero of whom they lost at birth on September 16, 1974. His family moved to Tulsa in 1984 after his wife, Marilyn was diagnosed with cancer and succumbing to the disease. She passed away on June 24, 1984. He then raised his girls as a single father while working as a grounds keeper for 18 years at Southern Hills Country Club. Jesse loved being around family and friends. He loved to listen to country, blues and Mexican music. He also enjoyed golfing, gardening and palying dominoes. He liked to watch his western shows, golf tennis and little league baseball in his free time. Most of all he enjoyed being around his 14 grandchildren and 2 great grandchildren. Jesse was preceded in death by his parents, Jesus Aguero, Sr. and Maria Elvira; his brother, Guadelupe Aguero and his wife of 20 years, Marilyn Gale Aguero; also two grand daughters, Chanel Ann Kirby, Edessa Gale Aguero and his great grandson, Antonio Jesus Lopez. Jesse is survived by his two sisters, Lidia Paquette and Lucy Watkins; three daughters, Jo Ann Aguero Kirby, Carmela Aguero and Laurie Tatum Aguero; 14 grandchildren; 2 great grandsons; and great granddaughter, on her way; a multitude of cousins, nieces and nephews. Memorial Service will be held on August 31st at 10th & Rockford Church of Christ in Tulsa, OK at 11:00 AM. Funeral and Inurnment will be held on September 6th at First American Baptist Church in Hobart, OK at 1:00 PM.

The family of Jesus “Jesse” Aguero, Jr. created this Life Tributes page to make it easy to share your memories.