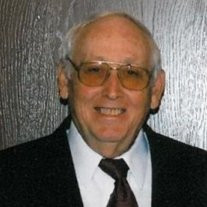 Jimmy Houston Greene, 85, of Tulsa, was called home on Monday, October 07, 2013, in Norman, Oklahoma. He was born on March 14, 1928 at home in Tulsa, Oklahoma, to Bernice Mildred and William H “Bill” Greene. Jimmy graduated from Tulsa Central High School in 1945. He joined the Army in 1946, and served until 1947, at which time he went to work for Stanolind Oil and Gas. On December 5, 1952 he married the love of his life Virginia Lee Owen. They were married for 52 years. Jimmy and Virginia were faithful Christians and were members of the Church of Christ. Jimmy was a published poet, and an avid golfer. He and Virginia also loved traveling, and after he retired from AMOCO in 1984 they took many trips together all over the United States. He was preceded in death by his parents, William and Bernice Greene, his brother, Harold Neil Greene, his wife, Virginia Lee Greene, and his son, Keith Owen Greene. Jimmy is survived by his daughter, Cynthia Sweatt of Norman and her husband John, and his daughter-in- law Jane Greene, of Tulsa. He has five beloved grandchildren, and four great grandchildren, Jackson Greene and his wife Nicole, and their children Houston, Cole, and Ava, Aubrey Pattison, and her daughter Ella, Cody Greene, Ashley Killgore and her husband Jonathan; and Matt Sweatt, and other family members and friends. Visitation will be Thursday evening, October 10th from 6:00 pm to 8:00 pm at Floral Haven Funeral Home. Funeral Services will be Friday, October 11th at 10:00 am at Floral Haven Funeral Home with committal service immediately following.

The family of Jimmy Houston Greene created this Life Tributes page to make it easy to share your memories.

Jimmy Houston Greene, 85, of Tulsa, was called home on Monday,...