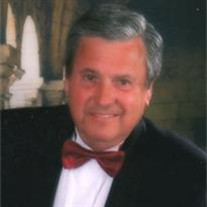 Joel Edmond Macoubrie was born January 31, 1939 in Brookfield, Missouri. He was the son of Ora Edmond Macoubrie and Millie Loss Mouse. Joel is survived by his wife, Sheryl L. Macoubrie, two sons, Michael E. Macoubrie and Scott J. Pryor, one step-son, Jason A. Thompson, and three grandchildren, Hayden, Sydney and Madilyn Bree Pryor. Joel graduated from Paola High School in Paola, Kansas, and later attended Pittsburg State University. He moved from Paola in 1959 to work for American Airlines. He volunteered to join the Air Force in 1961 and served four years in Okinawa, where he worked on Jets being flown in from Vietnam. Joel is classified as a Vietnam Veteran, and has always been proud he served his country. His family has enjoyed his Patriotic spirit through the years and learned much about respect for the flag and country from him. After serving in Okinawa, Joel was transferred to Travis Air Force Base. Following his service in the Air Force, Joel was able to return to American Airlines in a position in San Francisco. Joel loved San Francisco and the Napa area of the country from that time forward. He traveled there a number of times with family so they might also share the experience with him. Later Joel transferred to a position in Tulsa and completed a 35 year career with American Airlines holding a number of positions in the Maintenance Operation Center with experience that led him to 16 years of airline consulting in writing, editing and implementing maintenance programs for American Airlines after his retirement. Joelâ??s career spanned 51 years with American Airlines which ended in July of 2010 when he became ill. He had many long lasting friendships from his career who have stood by him during this two year journey of illness, offering support, prayers and love to him and his family for which we are deeply touched and grateful. Joel, like his mother, loved roses, and wherever he lived he always planted roses and loved their beauty. In fact, Joel always said he did not understand how anyone could miss seeing God in all the wonderful creations around us. He loved being in the country, and living around all the wildlife. Deer, geese, ducks, quail, pheasant, killdeers, bluebirds, painted buntings, wild turkey, skunks, opossums, raccoons, bob cats, three lobo grey wolves, coyotes, and even a road runner found a home on the ranch with the Macoubries along with their three cats and Sam, his Shiba-Inu, that Michael, his son, gave him as a birthday present. Joel loved classic cars, traveling â?? especially cruises and international travel, clogging, Spaghetti Westerns, Gene Autry and music. He was proud of his Scottish heritage and said his favorite vacation was travel to Scotland. He looked forward to going to Hawaii and staying at the family Time Share at Ko Olina on Oahu. His love for music stared when he played Tenor Sax in High School. He also has a talent for remembering the most extraordinary trivia detail about all kinds of music, movies and artists. Participating in the Living Christmas Tree presentations at Bethany was always a highlight of his year, and he formed many close friendships through the choir and his Bible Fellowship group. He loved his classmates, and time in Bible Study. Joel formed many close friendships in church, choir and Bible Fellowship, and was so touched by the prayers and loving service to him during his brave battle with cancer. The family wishes to express their love and thanks to all who called Joel, mailed cards and notes or have traveled to their home to sit with Joel, share with him, pray for him and help him with everyday tasks as his health failed. A person of honor, Joel strived to keep his commitments at work and to family and friends. He was a friend forever for those who came to know him well. He had an ability to make people feel at ease at first meeting. Joel was a loving father and husband. He leaves behind a big hole in our hearts, but we rejoice in his salvation and love of God and praise the Lord for the time we were given with him as it truly was a gift. We know we will see him again when we leave this temporary home heaven bound.

The family of Joel Edmond Macoubrie created this Life Tributes page to make it easy to share your memories.