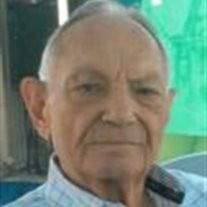 John Wallace “Bud” Stefanoff, age 85, passed away on Saturday, January 18, 2014. Bud was born on September 19, 1928 in a farm house just outside of Enid, Oklahoma. Bud was the son of Demo and Margaret Stefanoff of Enid, Oklahoma. Bud served as a Sergeant in the United States Army, and was stationed in Kobe, Japan during World War II. Upon returning from the Army, Bud married Martha Belle Owens in 1948. They lived in Tulsa, Oklahoma, where Bud worked as a Teamster’s truck driver. Bud and Martha had 5 children, the oldest son, Richard, passing away a few days after birth. Years later, after Bud and Martha divorced, Bud married Peggy Pauline McDaniel and had 2 sons. After retiring as a truck driver for Texas Oklahoma Express (TOX), Bud bought and managed the Bounty Lounge for 22 years. Following Bud’s retirement from the hospitality business, he enjoyed many years of traveling, with Aruba, Jamaica, and Hawaii among his favorite destinations. Many of his happiest memories are of his cabin and houseboat on Grand Lake, spending many summer weekends entertaining family and friends. Bud is preceded in death by his parents, Demo and Margaret Stefanoff; his brother, Leon Stefanoff; and his son, Richard Stefanoff. He is survived by his son, Ronald and wife, Jeanette Stefanoff; his daughter, Diana and husband, Frank Blissenback; his daughter, Teresa Stefanoff; his son, Mike and wife, Jeannie Stefanoff; his son, Buddy and wife, Dana Stefanoff; and his son, Steve and wife, Tammy Stefanoff; 6 grandchildren and 13 great grandchildren. Services to celebrate Bud’s life will be held in the chapel of Floral Haven Funeral Home on Wednesday, February 5, 2014 at 12:30 p.m. with Pastor Perry Cox, officiating, followed by a graveside service with military honors.

The family of John Wallace “Bud” Stefanoff created this Life Tributes page to make it easy to share your memories.