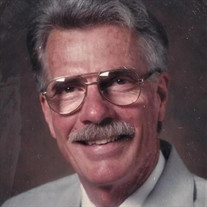 John Maynard Yates, known to his friends and family as “Jack”, retired as Hydrologist in Charge of the National Weather Service River Forecast Center in Tulsa, OK, died on September 26, 2021. Mr. Yates was born November 16, 1921 in Manteca, California to John Dewitt Yates and Bess Margerite Ranton Yates. A graduate of the University of California at Los Angeles, he served as a US Army Air Corps meteorologist and later as a hydrometeorologist with the US National Weather Service until his retirement in 1977. He guided the Tulsa River Forecast Center during its transition from hand-applied techniques to computer applications of hydrologic mathematical models for streamflow simulation within the Arkansas and Red River basins. He also made two tours to Central and South America nations as a consultant for the United Nations, advising governments on the establishment of streamflow forecasting systems. A veteran of World War II, he served as an officer with the US Army Air Corps (later Air Force) as Weather Station Commander and Aerial Weather Reconnaissance Officer aboard B-29 aircraft. He also served as a special agent with the US Army Counterintelligence Corps. He maintained his commission in the US Air Force Reserve and achieved the grade of Lieutenant Colonel. Mr. Yates was an avid backpacker, having covered over 4,000 miles in wilderness and national park areas. He had a particular liking for the Grand Canyon and made 54 descents on unmaintained backcountry trails. He was a charter member of the American Hiking Society, a member of the Ozark Highlands Trail Association and the Continental Divide Trail Association, and Vice President of the Pacific Crest Trail Association. A favorite activity was his productions of “Hikeplans” by computer to assist planning for backpack hikers on the pacific Crest Trail. Over 700 plans were produced for short segments and through, border-to-border hikes. Mr. Yates enjoyed singing with many groups, including the Tulsa Trinity Episcopal Church choir, I Cantori Madrigali, Coventry Chorale, the Tulsa Junior College Chorus, and the St. James Episcopal Church choir in La Jolla, California. Another long-term association was with the Tulsa Zoological Park where he was a charter docent. After moving from Tulsa to La Jolla in 1986, Mr. Yates enjoyed docent activities with the Maritime Museum Associations of San Diego, where he served as a guide on the historic sailing vessel “Star of India”. Also in La Jolla, he was a museum docent at the Scripps Institute Aquarium. Moving to Los Osos, California in 1996, Mr. Yates became a docent with the Central Coast Natural History Museum Association and led hikes in Montana de Oro State Park. Mr. Yates was married to the former Margaretta June Fifield from 1947 to her death in 1986. He was married to Shirlie Ritchey Cleveland from 1987 to her death in 2019. Survivors include his son John D. Yates II, daughter Dr. Marianne Williams, and seven granddaughters. A son, Robert C. Yates, preceded him in death in 1993. Contributions are suggested to the charity of one’s choice. No flowers, please.

The family of John "Jack" Yates created this Life Tributes page to make it easy to share your memories.

John Maynard Yates, known to his friends and family as “Jack”,...

Send flowers to the Yates family.