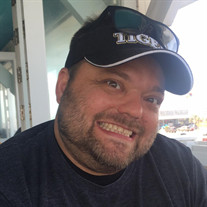 Joshua John Corn, son of Sue Corn(Keitel) and John Corn was born July 10, 1975, in Tulsa, Oklahoma. On June 16, 2021he lost a heroic battle with cancer and was called home by his Lord and Savior Jesus Christ. By his side was the love of his life Courtney Corn, and numerous family and friends. Joshua started school at Bible Baptist kindergarten in Broken Arrow and after a move to Texas he went to the first grade at Friendship Baptist in Beaumont, Texas. When the family moved back to Broken Arrow in 1983, he attended Broken Arrow schools and continued there through high school. He was active in soccer, baseball, scouts, and found one of the passions of his life in the Broken Arrow Pride High School Band. Lifelong friends were made while participating in the Pride and it was one the enriching experiences in his life. Joshua attended OU in the fall of 1993 and was a proud member of the OU Riot Squad. Joshua established a home in Tulsa after leaving OU and met and married Victoria Tudor who was his wife for eleven years. While married, Joshua continued his education and graduated with a degree in Business and Marketing at Northeastern Oklahoma State University. Joshua had several jobs to provide for his family while he attended school including sales in furniture, insurance, and food service and was diligent in his efforts to provide for his family. After graduation, he went to work for Arvest Bank where he worked and progressed from a teller to Branch Manager. He enjoyed the small community bank atmosphere and the numerous interactions with his customers. While his marriage to Victoria did not last forever, they remained friends until his final departure. They had two sons, Nicklaus, and Wesley Corn, of whom he was immensely proud. The parents and Courtney worked as a team to properly raise their blended family. In 2013, Joshua renewed his friendship with one of his high school band mates who became the love of his life. He and Courtney Ross joined their lives together on May 30, 2014. She had two children from a previous marriage, Devon and Kylie, who Joshua helped raise as his own. Joshua’s life was rich and abundant with the things that mean the most which include his relationship with his savior, his loving wife and children, generosity to others, and lifelong close friends. He and Courtney reached out to people that needed help many times and made lasting and significant change in the lives they touched. The family are long term active members of Core Church at Aspen Creek and lived and worked their faith. He is survived by his loving wife Courtney Corn, his children, Nicklaus and Wesley Corn and Devon and Kylie Lombard, his mother Sue (Keitel)Corn, father, John Corn and his wife Carol Corn, sister Clarissa Redding and husband Michael Redding, two brothers Jason Bentz and wife Stacy, and Eric Bentz and wife Becky, along with numerous cousins, nieces, and nephews. Memorial Services to celebrate Joshua’s life will be held on July 10, 2021, at 11:00 am at Core Church at Aspen Creek, 5205 S Aspen Ave, Broken Arrow, OK. Pastor Brad Farnsworth will be officiating. Cremation services will be conducted by Floral Haven.

Joshua John Corn, son of Sue Corn(Keitel) and John Corn was born July 10, 1975, in Tulsa, Oklahoma. On June 16, 2021he lost a heroic battle with cancer and was called home by his Lord and Savior Jesus Christ. By his side was the love of his... View Obituary & Service Information

The family of Joshua John Corn created this Life Tributes page to make it easy to share your memories.

Send flowers to the Corn family.