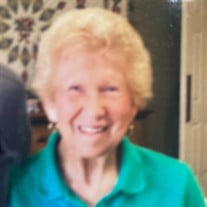 Joyce Lee was born on December 2nd, 1923 in Wenatchee, Washington to Cloyd and Nellie Inks. She was raised by her aunt in Ft. Wayne, Indiana after her mother's death from tuberculosis in 1932. In 1945, she traveled by train to California to visit her sister, Sally. While attending a chapel service there she met Harold Lee of Enid, Ok who was serving in the US Army. They married in November 1945 and returned to Stillwater, Oklahoma where Harold graduated from Oklahoma A&M in 1949. In 1951, they settled in Tulsa where they raised three sons. In 1985, they retired to the home they built at Lake Kiowa, Texas. In 2007 they moved to Owasso, Ok to be near son Steve to provide added care for Harold's Parkinson's Disease. After Harold's death in 2014, Joyce had an active life until declining health in 2020. She tested postive for Covid-19 on January 4, 2021 and went to Heaven on January 19, 2021. The United Methodist Church was a fixture of Joyce's life, she was always active at her church home. As she raised her three sons in east Tulsa, she was the consumate den mother to all...attending many ball games, swim meets, scouting events, church youth groups and even a band concert or two. Her retirement years at Lake Klowa were busy and full of joy. Joyce was involved in their United Methodist Church in Gainsville, Texas and was proud to have been a volunteer at North Texas Medical Center for over twenty years. She was an avid, deliberate gardener who enjoyed nature- especially wild birds. Joyce loved to cook and entertain family and friends. She was a world traveler with tours and cruises to Thailand, Alaska, and more. A lifelong Cowboy - GO POKES! She was a wonderful woman who lived a full Christian life until she was taken from us by this terrible disease. Joyce Lee is survived by her sons Steve and wife Kris Lee of Owasso, Oklahoma, Tom and wife Teresa Lee of Tulsa, Oklahoma, and Jerry Lee of McKinney, Texas. Additionally, Joyce was blessed with seven grandchildren, seven great grandchildren, and four great great grandchildren. Memorials may be made to: Meals on Wheels of Owasso 12620 E. 31st Street Tulsa, Oklahoma 74146

Joyce Lee was born on December 2nd, 1923 in Wenatchee, Washington to Cloyd and Nellie Inks. She was raised by her aunt in Ft. Wayne, Indiana after her mother's death from tuberculosis in 1932. In 1945, she traveled by train to California to... View Obituary & Service Information

The family of Joyce Lee created this Life Tributes page to make it easy to share your memories.

Joyce Lee was born on December 2nd, 1923 in Wenatchee, Washington...

Send flowers to the Lee family.