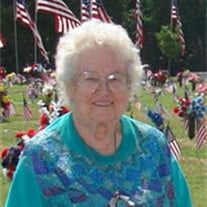 Juanita Maxine Dewey joined her husband Herman in Heaven Feb. 23, 2011. She was born Aug. 11, 1922 and had a full life at the age of 88. Born in Augusta, Kansas to Chester and Stella Devore, She was the oldest of 3, with a sister, Opal and a brother, Don. Growing up Juanita lived in Wichita, and went to Friends University following high school. She met Herman in Kansas and they were married in San Marcus, Texas on April 30, 1944 while Herman was on a 3 day leave from the Army Air Force. They later moved to Pryor, Oklahoma where Herman began work for American Airlines in 1947 and they started their family, Gary and Kathy. They moved to Tulsa in 1950 and Carl was born there. After Carl started school, Juanita became a speech teacher, first at Washington Elementary and then at Fulton Elementary School. At school she was often involved with plays, walkathons and most anything else someone needed help with. As a teacher she won several awards, one being the Freedom Foundation award. Juanita and Herman took their family on many camping trips. They were both avid rock collectors and belonged to the T-Town Rock Hounds club. As a rock hound, Juanita used her bargaining skills to the fullest to trade local Oklahoma finds for out of state material. After the boys left home, Herman and Juanita continued to travel, including to Australia, New Zealand, Italy and England. They also traveled most of the continental U.S. They often wintered in either Arizona or Florida. Summers were often spent in Minnesota or Michigan areas with a couple of times in Washington. Juanita was awarded roses for being a Methodist woman for 75 years. She attended St. Marks United Methodist Church for almost 50 years. Juanita leaves behind sons Gary and wife Karen of Denver Co. and Carl and wife Jody of Maple Valley WA, 6 grandchildren, and great-grandchildren, her brother Don Devore of Denver, Co., and her sister Opal Wheeler of Bountiful, UT. She was preceded in death by her daughter Kathy, her parents, her husband Herman, and her grandson Michael. Juanita will be remembered for her bright smile, sense of humor, couponing, and willingness to help everyone. She always had a story or joke to tell, and a great witchesâ?? laugh. We will all miss her greatly. Visitation will be Monday, February 28th from 11:00 am to 9:00 pm at Floral Haven Funeral Home. Funeral Service will be 10:00 am, Tuesday, March 1st at St. Markâ??s United Methodist Church with the committal at 3:00 pm, Tuesday, March 1st at Floral Haven Memorial Gardens.

Juanita Maxine Dewey joined her husband Herman in Heaven Feb. 23, 2011. She was born Aug. 11, 1922 and had a full life at the age of 88. Born in Augusta, Kansas to Chester and Stella Devore, She was the oldest of 3, with a sister, Opal and a... View Obituary & Service Information

The family of Juanita Maxine Dewey created this Life Tributes page to make it easy to share your memories.