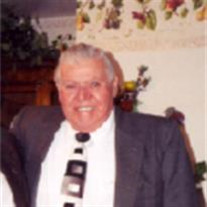 Kenneth Richard Miller, 84, of Tulsa, Oklahoma, died Friday, September 21st at St. Simeon’s Episcopal Home. He was born on October 2nd, 1922 in Fredonia, Kansas, the son of Herbert and Clara Miller. Following graduation from Fredonia High School in 1940, he enlisted in the U.S. Army-Air Force. Prior to the start of WWII, he was stationed on the Philippine Islands. Following the attack on Pearl Harbor and the ensuing three-month Battle of Bataan, he was captured along with over 70,000 Filipino and American soldiers. The soldiers were forced to hike over 62 miles without food or drink in what would infamously become known as the Bataan Death March. The heat, disease, and brutality of their captors eventually caused the death of over 10,000 of the 70,000 prisoners, thus becoming a defining, and vicious, episode of the War. Over the next three and a half years he was a prisoner of war shuttled from camp to camp in inhumane conditions, transported in box cars, the infamous “hell ships”, and on foot. Prisoners suffered from disease, famine, and eventual death from the ensuing work conditions. In 1945 the POW’s were liberated from prison camps following the atomic bombs dropped on Hiroshima and Nagasaki. Upon his return to the United States he received two purple hearts and was decorated with numerous medals for his valor and role during his active duty. Returning to the states and recouping from disease, malnutrition, and malaria he met Maxine Alice Russell, an Army Nurse Cadet and Registered Nurse trained at Wesley Medical Center, in Wichita, Kansas. They were married on July 28th, 1946. She preceded him in death on February 21st, 2007. He attended college at Kansas State University in Manhattan, Kansas and Wichita State University in Wichita, Kansas and studied electrical engineering. Throughout much of his life he carried the physical and emotional scars of the events of his past; however, his will to survive was as strong in 2007 as it was during his time as a POW sixty years before. Over the next three decades he enjoyed life and challenged it daily with his quest for achievement. After returning to civilian life, Kenneth and Maxine purchased a farm outside of Altoona, Kansas engaging in farming for several years. His ability to farm full time, however, was cut short when he was severely injured in an accident involving farm machinery. Not letting that stop him, he went to work for the US Postal Service delivering mail on rural routes in the area. During the next 50 years he designed, built and remodeled homes, using his new found knowledge of fiberglass he carried it into preserving and repairing wood speedboats, horse carriages, cars, motorcycles, racing carts and more. Kenneth was always fascinated by ham radios and anything else that was electronic. During that same period he rebuilt several Ford Model “A” cars. He was driven as a metal machinist, building and racing modified midgets winning numerous national races throughout the country. Racing was his passion. Upon retirement he and Maxine traveled extensively in their motor home. They developed new hobbies including lapidary, in which they collected rocks during their travels and cut and polished them into rings and other jewelry. He become proficient with computers and loved to write programs for early DOS programs. He was a voracious reader of novels and continued to stay proficient with technology and computers until his death. His hobbies included fishing, boating, skiing, playing snooker and pool, and travel. A memorial service will be held at St. Simeon’s Episcopal Home on Wednesday, September 26th at 1:00pm. In lieu of flowers, the family request donations to either the American Cancer Society or Alzheimer’s Association.Survived By: his two children, Cindy Finley of Tulsa, Oklahoma, Chris Miller and wife Pam of Tulsa, Oklahoma, two grandchildren, Anthony Miller and his wife Ryean of Tulsa, Oklahoma and Nick Miller of Jersey City, New Jersey, one sister, Marie Tyler of Colorado Springs, and several nieces and nephews. His wife of 60 years, Maxine, and 2 sisters, Dorothy and Leona, precedes him in death.

The family of Kenneth Richard Miller created this Life Tributes page to make it easy to share your memories.