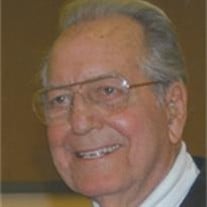 Lahman D. Jones passed away at home Tuesday, September 27, 2011 with his family at his bedside. Lahman was born April 26, 1927 in Healdton, Oklahoma to Cletus and Anna Jones. After graduating from Healdton High School in 1945 he joined the U.S. Army. While in the Army he won the Southern Oklahoma Golden Gloves featherweight Championship and also boxed one year with the OU boxing team. Out of 102 matches he lost only 4. After being honorably discharged, he attended Oklahoma University, Norman and earned a B.S. degree in Education. He later went on to earn a Masterâ??s in Administrative Education from Northeastern State University at Tahlequah and worked on his doctorial degree at OSU Stillwater. Lahman worked in various positions in fund raising and in the finance industry. He retired from his position in ORUâ??s deferred gifts department in 1986 and went back to his first love of teaching. He joined the faculty of Tulsa Community College and taught statistics and physical science up until the time he was diagnosed in July of 2011 with a very aggressive type of lymphoma. In addition to his finance and teaching positions, Lahman served on the Tulsa Public Schools Board of Education in 1963 for 3 years. He was on the board during a volatile period of time, as racial segregation was ended in Oklahoma in 1964. In 1973 he was elected to the Tulsa County Vo-Tech School Board where he served a total of 23 years. Lahman received a number of honors in his career but treasured most the ones received from the education community; Distinguished Service Award from Oklahoma State School Board Association in 1991, and Award for Teaching Excellence received from TCC in 2007. Of all his varied positions he treasured the years spent at TCC. His reputation as an instructor who cared for each of his students and helped them succeed was well known. He received many kudos from the hundreds of students he taught. So many that he filled a large scrap book with them. Lahman also loved being an Extraordinary Minister of Holy Communion at St. Pius X Catholic Church, where he served faithfully. Preceding Lahman in death were his parents, daughters Cherry Lynn, Jennifer Lee, brothers Sonny Jones, Kurt Jones. Surviving Lahman is his loving wife of 45 years, Patricia, sons Stanley Jones & wife Tammy, Christopher Jones & wife Mary, Michael Eubanks and wife Becky, daughters Karen McNeil & husband Cecil, Cindy Dale, & Janis Eubanks, sister Hyla Hart, Cleta Gray & husband Andy, brothers Donald Jones & wife Emily, Butch Jones & wife Lou, Rick Jones & wife Tanya. Lahman adored each of his 20 grandchildren and 14 great-grandchildren, and his many nieces, nephews, and dear friends. We will always remember his warm smile and gentle ways and he will live on in our hearts forever. A Rosary will be held at St. Pius X Church Thursday, September 29, 2011 at 7:00 pm. A Mass of the Resurrection will be held at St. Pius X Church Friday, September 30, 2011 at 10:00 am. Interment will be at Floral Haven Cemetery. Memorial donation may be made to St. Pius X Catholic Church School, or to St. Pius X general fund. .

Lahman D. Jones passed away at home Tuesday, September 27, 2011 with his family at his bedside. Lahman was born April 26, 1927 in Healdton, Oklahoma to Cletus and Anna Jones. After graduating from Healdton High School in 1945 he joined the U.S.... View Obituary & Service Information

The family of Lahman Dale Jones created this Life Tributes page to make it easy to share your memories.