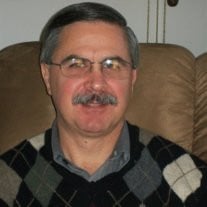 Larry Donald Schwarzkopf was born November 12, 1954, to Donald & Laurel (Lolly) Schwarzkopf in St. Cloud, Minnesota. Larry was raised in Becker, Minnesota, with his siblings: Sherry, Linda, Craig and Sandi. Larry attended Becker Public Schools where he played baseball and basketball and graduated in 1972. His first job was picking strawberries at Johnson’s Strawberry Farm. During his senior year of high school, he began working with his Dad at Cater & Odegard in St. Cloud. This began a life-long career in the farm equipment industry. Larry and Janice Allgood were married in September of 1977, purchased a home in Becker, and welcomed their first child, a daughter, Jennifer Kay, in June of 1979. In January of 1981, they welcomed their second child, and first son, David Mark. In 1982 Larry and Janice felt God moving them to Tulsa, Oklahoma where Larry began working as the Parts Manager at Bridges Ford Tractor. In February of 1986 Larry became the Parts Manager at Tulsa New Holland. During this time, Larry and Janice welcomed their “Okie” children, another daughter, Heidi Beth, in February of 1984, and their youngest son, Brian Daniel, in May of 1986. Larry worked at Tulsa New Holland for 17 1/2 years. In August of 2003, Larry and Janice felt God calling them back to Minnesota where Larry took a job as Parts Manager at Aitkin Implement in Aitkin, Minnesota where he worked until 2012. He enjoyed his work and always took pride in what he did. He became very well known in the Ford, New Holland, and Bobcat worlds for his wide knowledge of tractor parts as well as his ethics, professionalism, and the way he took care of his customers. Even once they had moved back to Minnesota Larry was still known to answer questions and help with orders from customers all over the states. In March of 2013, Larry and Janice returned to Tulsa where Larry spent his last days with his wife, children and grandchildren. Larry served on the Deacon Board for many years at the churches he and Janice attended including: Monticello Assembly of God, Faith Assembly of God and Aitkin Assembly of God. He became well respected and known for his servant’s heart and integrity. Many looked to him for wisdom, knowledge of the Bible, and Godly leadership.Larry also enjoyed many activities including gardening, rock collecting, bowling, traveling, space, car and snowmobile racing, reading, and nature. Larry loved to fish and hunt, and did both as often as he could. He enjoyed taking David and Brian with him, and instilled in them his love of the outdoors and God’s creation. Larry is survived by his wife of 35 1/2 years, Janice; children, Jennifer (Paul) Amstutz of Tulsa, David (Breanna) Schwarzkopf of Tulsa, Heidi (Kyle) Jackson of Tulsa, Brian Schwarzkopf of Enid; grandson, Parker Schwarzkopf; granddaughter, Alexis Schwarzkopf; dad, Donald Schwarzkopf of Clear Lake, Minnesota, three sisters, Sherry (Rick) Busse of Foley, MN, Linda (George) Lemperes of Becker, Sandi (Glen) Hilsgen of Rockville, MN; brother, Craig (Sandy) Schwarzkopf; many nieces, nephews, aunts, uncles and cousins. He was preceded in death by his infant brother, Jeremy, and Mother, Laurel (Lolly) Schwarzkopf.

The family of Larry Donald Schwarzkopf created this Life Tributes page to make it easy to share your memories.