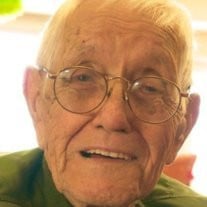 Lawrence "Larry" Eugene Christenson passed peacefully to eternal life on May 24, 2013 at the age of 95. Larry is survived by his loving wife Ruth Jean Christenson. They would have been married 70 years on September 23, 2013. Also surviving is his son, Larry R. Christenson and his wife, Lyn; his grandson, Alex Christenson; his daughter, Carolyn Jones and her husband Jim; his son, Terry D. Christenson and his wife, Teresa and several nieces and nephews. Proceeded in death by his parents, Pete & Ida Christenson, brother Melvin Christenson, brothers Orval and Harold Christenson and sister Mildred Parks. Larry was a member of the Antioch Community Church in Kansas City, Missouri. Larry served as the Scoutmaster of Troop 302 sponsored by the Antioch Community Church for seventeen years. His two sons and grandson are Eagle Scouts. He was a member of the Shrine Ararat Temple Oasis of Kansas City, Missouri in the mini Model T unit and participated in many parades throughout Missouri and for over 50 years was a member of the Eastgate Lodge #630 in Kansas City. After moving to Tulsa he joined the Akdar Shrine in the Directors unit. Both in Kansas City and Tulsa he transported children to the Shrine Hospitals for Crippled and Burn Children located in St. Louis, Mo., Shreveport, Louisiana and Galveston, Texas for their follow-up appointments, treatment and care. Larry also helped at the Shrine Circuses both in Tulsa and Kansas City. He enjoyed being around children. Larry enjoyed selling the Vidalia onions for the Shriners. He was also a member of the Saba Grotto group in Tulsa and enjoyed helping sell the programs at the basketball games. He also was a member of the Tulsa Scottish Rite. Larry was the youngest of 5 children and was born on September 17, 1917 in Miller, Kansas. He graduated from Miller High School in 1935 and attended Emporia State Teachers College. In 1942 he enlisted in the Army Air Corps. He applied for and was accepted for the Cadets and was stationed at Santa Ana, California. In May of 1943, Larry met Ruth Jean in Los Angeles, California. They were married on September 23, 1943 in North Hollywood, California. Larry was commissioned Second Lieutenant in February of 1944. Once he completed his flight crew training he was ordered overseas to England with his crew and took Radar Training. He flew B26s as bombardier navigator with the 394th Bomb Group, 584th Bomb Squadron, 9th Air Force entering combat in March of 1944. He flew 45 group lead bombing missions (World War II-1944-1945). Larry was awarded several decorations, including the Purple Heart Medal; Distinguished Flying Cross for Extraordinary Achievement in Action; European-African-Middle Eastern Campaign Medal with 4 Bronze Service Stars; American Campaign Medal; World War II Victory Medal; Distinguished Unit Citation; French Croix de Guerre with Palm. In 1945, Larry returned to the States and separated with a reserve commission as First Lieutenant. In 1951 he was recalled for the Korean conflict. He flew 30 bombing missions (B29s) based in Okinawa. In March of 1953, he resigned his commission and returned to the states as a civilian. Larry was a patriot to the core and always honored those who served and gave their lives for the country that he loved so much, the United States of America. Larry worked for Canada Dry in sales and then a year later went to work for Sealtest Ice Cream. He retired from Sealtest in 1974.Larry always made sure that his family was taken care of. He took them on many family vacations from Disneyland to the Lake of the Ozarks. Many memories were created from those times. A Celebration of Life will take place on Saturday, June 8, 2013 at 12:30pm at Floral Haven Funeral Home. A military service will follow. In lieu of flowers, the family requests donations in Larry's name to the Shrine Hospitals for Crippled and Burn Children.

Lawrence "Larry" Eugene Christenson passed peacefully to eternal life on May 24, 2013 at the age of 95. Larry is survived by his loving wife Ruth Jean Christenson. They would have been married 70 years on September 23, 2013. Also surviving... View Obituary & Service Information

The family of Lawrence E. Christenson created this Life Tributes page to make it easy to share your memories.