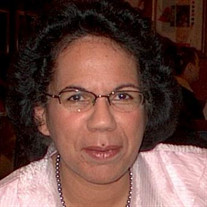 Lydia Tejada-Smith May 11, 1947 - December 13, 2021 In her final days, Lydia, also affectionately known as “Mom”, “Titi”, “Olive Oil” (by her Papa Cayó) and most recently, “Gammy”, did what she does best. She did something really sweet while she was really really late. Discovered in her closet 4 days before her passing was a box she had been mentioning on and off for the last year. Her 2 great-nephews said goodbyes and were given a set of remote controlled cars that had been stashed away for the previous Christmas. A poetic lasting impression from someone who’s love language has always been gift giving. Born to Roberto and Lydia Tejada in Brooklyn, New York, she was her father’s third child and her mother’s first of four. Lydia was elegant and stylish and could not… no, would not be rushed. This was much to her family’s irritation but in retrospect, she was living her life on her terms. A life where she would set her own pace. This suited her well as she was an example every single day with every single action to slow down and smell the roses. She was considerate in every sense of the word. Her style suggested she considered every movement carefully. While out shopping she considered the people she loved, often picking up small items here and there as gifts. “This reminded me of you“ or “I thought you could use this” were common things she’d say. Lydia had a gift closet and when she went in there, rummaging around ever so slowly between Christmas decorations or bulk boxes of ginger ale, you knew whatever she took out was something you'd really enjoy. Lydia wasn’t one to take the spotlight but that didn’t mean she didn’t enjoy the show. She truly appreciated a good laugh and was delighted by the people around her, no matter how loud or cooky they were. As a teen, she’d send out her little sister and a friend to pick blueberries across the street and bake muffins or other sweet treats. Later in life her home would be carefully assembled, every piece of decor serving a specific purpose. Her home was always beautiful and welcoming, a great accomplishment of hers along with her flourishing garden. When you went to her home, she’d make sure you were fed, comfortable, and prayed for. Holidays, birthday parties, celebrations of all kinds - she was there, running the kitchen. But even the unplanned events were cared for in a really special way. A day at her pool would almost certainly end with the grand finale of her serving up a giant tray of watermelon. The people who knew Lydia could probably agree that all of these expressions of her love made her unforgettable. She is survived by her husband of 47 years, Skipper Smith and their 3 children. Her daughter, Raquel Tejada-Smith, Her son and daughter-in-law, Jonathan & Melba Tejada-Smith and her son Daniel Tejada-Smith. She is also survived by her brother José Tejada and sister Myriam Puleo. The funeral service will be 10:00 AM, Tuesday, December 21, 2021 at Floral Haven Funeral Home Chapel, Broken Arrow, Ok.

The family of Lydia Esther Tejada-Smith created this Life Tributes page to make it easy to share your memories.

Send flowers to the Tejada-Smith family.