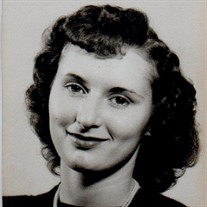 Margaret Elaine (Johnson) McKinley of Tulsa, Oklahoma, died April 19, 2020. She is survived by her three children; Deborah Lynne (McKinley) McMahan of Tulsa, Diannah Marie McKinley and husband Don Carrico of Tulsa, and John William McKinley of Bartlesville, Oklahoma. Survivors also include four grandchildren and seven great grandchildren. The four grandchildren are Brandon (Krista) Neal and children Kaich, Elizabeth, and Zoe of Stillwater, Oklahoma; Eric (Heather) Neal and children Wyatt and Cora of Ft. Gibson, Oklahoma; Ethan (Megan) McMahan and children Isla and Hadley of Monmouth, Oregon, and John McKinley II of Bartlesville, Oklahoma. She is also survived by a sister Ethel (Johnson) Taylor of Hays, Kansas. Margaret Elaine was born November 16, 1930 at the Johnson farm home in Decatur County, Kansas. She was the second of three daughters born to Otto and Gladys (Huff) Johnson. An early winter, plains country blizzard began the morning of her birth, handicapping the doctor’s travel over six miles of dirt roads from Jennings, Kansas to the Johnson farm, but he managed to make it before Margaret Elaine’s arrival. However, by afternoon the roads had become impassable for automobiles of that time, so her father used a team of horses hitched to a wagon and traveled the four miles to Kanona, Kansas to get a neighbor lady who would help with family needs. The farm home in which she grew up was typical of Western Kansas at that period of time, with no electricity, heat from a single wood/coal stove, a wood-burning kitchen cooking stove, water from a cistern, and kerosene lamps for night-time light and outdoor necessary facilities. The rugged beginning and austere living conditions, made worse by the dust storms of the dirty thirties paled in comparison to the life-changing event of her mother’s death as a result of an appendix operation when she was six years old. Her father rose to the occasion, and people of the area all agreed he raised three fine girls. Margaret Elaine and her sisters, Mary and Ethel, attended a two-room elementary school at Kanona, Kansas, four miles northwest of their home. Transportation was by a Model A Ford school bus, driven by a neighbor boy. She attended Jennings high school and was valedictorian of her graduating class. From there she attended Fort Hays Kansas State University and graduated in 1952 with a degree in Home Economics. It was at Fort Hays that she met Myron McKinley. They were married August 3, 1952. During the 1952-1953 school year, she taught Home Economics at the junior high school in Dodge City, Kansas. Besides Didge City and Decatur County, Kansas, she has lived in Akron, Ohio, Tulsa, Oklahoma, Cleveland, Ohio, and Chicago, Illinois. Because she grew up without a mother, she wanted to be a “stay-at-home mom”. She and Myron agreed to a plan. He would make the living, and she would make the living worthwhile. According to Myron, she exceeded at her part of the bargain. When their children were growing up, they always had a house or yard full of neighborhood children. Her grandsons, Brandon Neal, Eric Neal, Ethan McMahan, and John McKinley II were very special to her, and her time with each was always a pleasure for her and a loving and learning experience for them. During the years she lived in the Chicago area, the three older grandsons benefitted from the excellent museums and the points of historical significance of that area and neighboring states. Her knowledge of the Washington, DC area made their trips to the nation’s capital an exceptional experience. Although she was not able to spend the kind of time or amount of time with her great-grandchildren as with her grandchildren, all were precious to her, and all of her family of equal importance. Her life was molded around her family, and it fit her like a designer gown. Memorial Service is pending at this time.

The family of Margaret Elaine McKinley created this Life Tributes page to make it easy to share your memories.

Send flowers to the McKinley family.