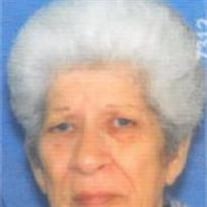 Margie Joan Johnson, 75, passed from this life on May 29, 2012 in Claremore, OK. Margie was born on September 8, 1936 in Tulsa, OK to William and Cora VanMeter. Margie met and married Fay James Johnson, Jr. on December 21, 1959 and they shared many memorable years together. She was a stay at home mom until her son went to school. At that time, she took part time jobs to pass the time until her son got out of school. Margie and her husband F.J. and son, Todd lived in Broken Arrow until mid 1982 at which time they moved to the Lake at White Horn Cove. She worked at Oak Cliff Grocery until it sold just so that she could keep up with what was going on around the Lake.Margie was a friend to any and everybody and never met a person that she would not talk to. She was active in Twin Oaks Baptist Church, helped with the Red Cross, and helped on the election board out at the Lake. Margie always loved to help people and it did not matter who it was. Sometimes the old saying â??to know her is to love herâ? is used too often but in Margieâ??s case it is very true not just because Iâ??m her son and love her itâ??s because of how she was brought up. Her motto was nobody is better than anybody else, weâ??re all equal and that is how she lived. She will be greatly missed by all who know her.She was preceded in death by her parents; sister, Betty Coulson and brother. Margie is survived by her husband, F.J. Johnson, Jr.; son, Todd Johnson and wife, Jennifer; grandchildren, Todd James Johnson, Tatum Johnson, Jaedyn Johnson, Kristina Johnson and Jessica Mauro; brothers, Tommy Coleman and wife, Zoe and Jerry Coleman; sister, Catherine Wagner; and cousin, Danny.Â  Visitation will be 4-9PM Friday, June 1, 2012 at Floral Haven Funeral Home with Funeral Services 3:00 PM Saturday, June 2, 2012 Floral Haven Funeral Home Chapel.

Margie Joan Johnson, 75, passed from this life on May 29, 2012 in Claremore, OK. Margie was born on September 8, 1936 in Tulsa, OK to William and Cora VanMeter. Margie met and married Fay James Johnson, Jr. on December 21, 1959 and they shared... View Obituary & Service Information

The family of Margie Joan Johnson created this Life Tributes page to make it easy to share your memories.