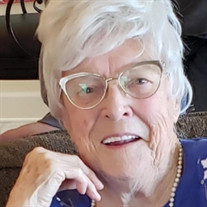 Marjorie Knight Murray, 92, a 68-year resident of Tulsa, OK, passed away in Hot Springs, AR, on March 4, 2020, from sarcoma. A native of Palmyra, NJ, Margie and her late husband Bill moved to Tulsa as newlyweds in 1951 for Bill's job as a powerplant engineer at American Airlines' maintenance base. She loved to tell the story that their honeymoon was a drive halfway across the country to Oklahoma. She worked briefly at American Airlines as a secretary before starting a family. She was an accomplished seamstress and baker, and she sewed and donated numerous Raggedy Ann dolls for Emergency Infant Services of Tulsa, where she also served as a volunteer for many years. Her children will remember her by the many things she taught them, including a love of reading, baking, swimming and sewing. Her joy in baking and giving away cinnamon rolls has passed down to her son and grandson. She always stressed the importance of maintaining a positive attitude and a sharp mind, and she demonstrated her own sharp mind by solving word puzzles daily until the last weeks of her life. Margie was a member of All Souls Unitarian Church in Tulsa and the Unitarian Universalist Church of Hot Springs. She firmly believed that everyone should be treated with respect regardless of their beliefs, preferences, background or appearance. She is survived by her sister Betty O'Connor (Burlington, NJ); four sons - Bill Murray (spouse Liddie, Hilton Head, SC); Tom Murray (Kansas City, MO); Ken Murray (spouse Dana, Broken Arrow, OK); and David Murray (spouse Lin, The Hills, Texas); a daughter Barbara Vrba (spouse Steve, Hot Springs, AR); ten grandchildren - Stephanie (Sunnyvale, CA); Logan (Boston, MA); Jennifer (Tulsa, OK); Ryan (Dallas, TX); William (Coweta, OK); Matthew (Broken Arrow, OK); Nathan (Broken Arrow, OK); Susan (Cape Girardeau, MO); David (Oklahoma City, OK); and Colin (Oklahoma City, OK); and great grandchildren Jack, Paisley and Jaxson. She was preceded in death by her husband of 35 years, Bill Murray, and her sister, Emma Stinson. Services will be private. Suggested recipients of memorial donations are Emergency Infant Services of Tulsa, eistulsa.org, and the Unitarian Universalist Church of Hot Springs, PO Box 3125, Hot Springs, Arkansas 71914.

Marjorie Knight Murray, 92, a 68-year resident of Tulsa, OK, passed away in Hot Springs, AR, on March 4, 2020, from sarcoma. A native of Palmyra, NJ, Margie and her late husband Bill moved to Tulsa as newlyweds in 1951 for Bill's job as a powerplant... View Obituary & Service Information

The family of Marjorie Knight Murray created this Life Tributes page to make it easy to share your memories.

Send flowers to the Murray family.