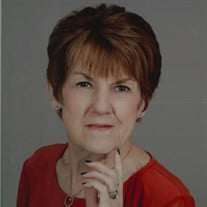 Mary Alice McKean Marchetti was born on November 22, 1943 and grew up in her hometown of Lexington, Missouri. She graduated from Lexington High School in 1961. She married her high school sweetheart, George Marchetti, on August 22, 1964 at the First Presbyterian Church of Lexington. Mary died on May 5, 2021, entering into the eternal rest of her heavenly home with her Triune God. She is lovingly remembered as a beloved, devoted wife, mother, grandmother, sister, aunt, and friend. Mary was a faithful follower of her Lord Jesus Christ, worshiping in the various churches she actively served throughout her lifetime. She enjoyed reading, crossword puzzles, gardening, and travelling – above all, to Italy (for which she fondly held warmest affection). Mary won the friendship of neighbors, co-workers, and church congregants by her winsome smile and laughter that she shared until the very end. Mary is preceded in death by her parents, George and Ferne McKean; her father-in-law and mother-in-law, John and Gladys Marchetti; her brothers, George B. McKean and Gerald McKean and his wife, Susanne; her nephew, David Wykoff; and her niece, K’Ann Barker. Mary is survived by her husband, George; her older son, Dan with his wife, Liana, and son, Jonathan; her younger son, Kenny; her sister-in-law, Jo Anne McKean; her brother-in-law, John Marchetti and his wife, Linda; her other brother-in-law, Roy Marchetti and his wife, Joyce; and her many nieces and nephews: Bill and Nancy Cox, Tim McKean, Don and Susan Wykoff, Bruce and Dee Bergheger, Stephen and Laurel Trzaskoma, Brian and Mindy Wells, Nick and Leslie Marchetti, and Tony and Rachael Marchetti. The Memorial Service will be held on Saturday, May 15, 2021 at 3:00 PM at St. John’s Episcopal Church in Tulsa, Oklahoma. In lieu of flowers, please send memorial donations to St. John’s Episcopal Church.

Mary Alice McKean Marchetti was born on November 22, 1943 and grew up in her hometown of Lexington, Missouri. She graduated from Lexington High School in 1961. She married her high school sweetheart, George Marchetti, on August 22, 1964 at... View Obituary & Service Information

The family of Mary Alice Marchetti created this Life Tributes page to make it easy to share your memories.

Send flowers to the Marchetti family.