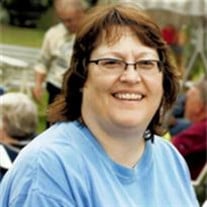 Memory Ann Bledsoe died July 12, 2010, surrounded by her family, after a year-long battle with cancer. Born June 18, 1959 in Tulsa, Memory was a graduate of Big Cabin High School, Claremore Junior College, NEO A&M, and Oklahoma State University. Memory valued three things in life above all–God, family and friends. She excelled at many things, especially at being a stellar aunt to her nephew, Derek Kostelnick; nieces, Karissa Kostelnick and Grace Bledsoe; and many cousins whom she also considered nieces and nephews. Memory had a successful career as a systems analyst and over the years worked at American Airlines, Sabre, EDS, and Bank of Oklahoma. Memory was an avid fan of OSU, holding season football tickets, and following her Pokes on the road and to bowl games as well as the Final Four. During her free time, Memory traveled the world with her dearest friend, Julie Barnes.As Memory battled her final illness, many people spent time in the trenches alongside her, in particular her cousin, friend, and fellow Craig County beauty queen Nancy Borgstrom. Memory was preceded in death by her beloved sainted mother, Memory Ann Clark Bledsoe. In addition to the friends and family already mentioned, Memory is survived by her adored and adoring father, William Bledsoe of Verdigris; big brother Mark Bledsoe and his wife Kimberlee Williams of Oklahoma City; little sister Kathy Kostelnick of Broken Arrow; and a whole herd of aunts, uncles, cousins, and friends, all of whom she treasured. In lieu of flowers, the family requests that memorial donations be made to the Children’s Ministry Programs at Garnett Church of Christ (Tulsa) where Memory was a Sunday School teacher for many years; or to the Children’s Ministry Programs at Catoosa Church of Christ.Funeral Services for Memory Bledsoe will be held on Friday, July 16, 2010 at 11AM at the Garnett Church of Christ, 12000 East 31st Street, in Tulsa. There will be a visitation from 1pm until 9pm on Thursday, with family present between 6pm and 8pm.

The family of Memory Ann Bledsoe created this Life Tributes page to make it easy to share your memories.