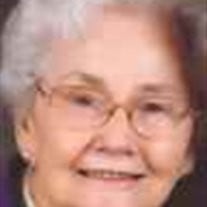 Mildred “Millie” (Clark) Butenschoen, Mother of the Year for 68 consecutive years passed away peacefully Saturday January 4, 2014. Born in Baton Rouge, LA, June 22, 1922, she lived a full and long life of love, laughter, some sadness and much happiness. The epitome of Grace and kindness she was a Southern Lady with a bit of mischief added in to complete the package. Although leaving Louisiana for Wichita, KS in 1946 to start a new life with her husband “Clark”, ultimately moving to Tulsa in 1957, she never lost an endearing southern drawl that entertained many and at times confused others. She was immersed in raising a family, PTA and many other acronym organizations, being a Soccer Mom before that was a thing and everyday being a caring and loving wife. She enjoyed keeping a tastefully decorated warm and inviting home, entertaining family and friends and was a wonderful cook preparing every dish with a spoon full of sugar, “everything’s better with sugar”, the same could be said about her. Widowed in 1976, eight years later she met Joe, the second luckiest man in the world. They married and she moved to Checotah to begin a second life adventure. They enjoyed traveling and seeing the sights of the lower 48 states often flying in Joe’s plane. She loved sports of all kinds but as a graduate of LSU she was an avid Tiger football and baseball fan. On game days Joe would hang her LSU flag knowing pretty much that he “wouldn’t get a lick of work out of her” until whatever game she was watching was over. The attire for the day could be a logoed sweatshirt or on really cold days (70 degrees or less) a purple and gold Snuggie. She was Mama to her children. She adored them and the feeling was mutual. She was Millie to her friends, acquaintances and new sons and daughters. She was “Nanny” to her grandchildren, great grandchildren and great great grandchild and she loved them all. Their visits always put a smile on her face and a twinkle in her eye. Mama, Millie, Nanny, you will be missed by all who knew you. Millie was preceded in death by her husband of 32 years Bernard E. Clark, parents Daniel and Allie Morgan, siblings Opal Tucker, John Morgan, Haskell Morgan, May Tokos, D.J Morgan. and Margie Both, son-in-law Bill Dunbar. She is survived by her husband of 29 years Joseph Butenschoen, sons Bernard E. Clark Jr. (Patti), Randy Clark (Terry), Jim Butenschoen (Becky), Mike Butenschoen (Lou), daughters Jodi Benton (Barry) and Linda Dunbar. Grandchildren, Daniel Clark, Zac Clark, Allie Alderson (Kyle), Russell Butenschoen , Amy Galdamez (Gerardo), Adam Butenschoen (Leslie), Travis Benton, Casie Brim (Nick), Jared Benton, Matt Dunbar, Mark Dunbar and Paige Dunbar., Great Grandchildren Henry Alderson, Traver Butenschoen, Madelyn Benton, Leo Galdamez, Martha Galdamez and Kathryn Brim. Great Great Grandchild Jaydan Butenschoen. In recent years, because of their love of their children and grandchildren, Joe and Millie have been constant supporters of St. Jude’s Children’s Hospital. If you choose to express your love, in lieu of flowers please make a contribution in her memory.

The family of Mildred Emma Butenschoen created this Life Tributes page to make it easy to share your memories.

Mildred “Millie” (Clark) Butenschoen, Mother of the Year for...