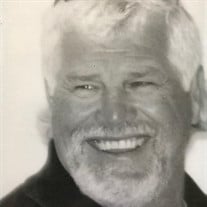 Mitchell (Butch) Crawford, passed away on Thursday August 27,2020 after battling COVID-19 for six weeks. He was born to Opie and Lorraine Crawford in Pryor, OK on 12/21/1953. Butch celebrated a successful life contributing to the lives of many students throughout Oklahoma. He taught and coached for 30 years. After retiring from teaching he took on the role of a department manager at Lowe’s. Butch was found in his early years enjoying fast pitch softball, where he and his team the Cherokee Hoser’s won the fast pitch national championship in 1995. He was nominated All American and MVP of the championship. He was known to throw an underhand pitch faster than many baseball players threw one overhanded. Butch never ran into a person that he couldn’t strike up a conversation with. He was looked up to by many he knew and was a wonderful husband, father, son, brother and friend. He enjoyed hunting as often as he could, loved playing golf in his free time with his brother Steve, and spending time with his family. Butch was preceded in death by his father, Opie Crawford; grandchildren, Jaci & Ashton. He is survived in death by his wife, Vicki; children, Cindy & Sean Barton, Summer & Rick Aldridge, Shanda & Justin Kurth, Ashley Robertson & Josh, and Mitch & Shannon Crawford; 16 grandchildren; mother, Lorraine Crawford; brothers, Richard & Steve Crawford; sisters, Connie Haley, Judy Harris, Sandy Cooksey, and Cheryl Swearengin; And many other extended family members. Visitation services will be held from 9am-12pm Friday 9/4/2020 at Floral Haven Chapel, 6500 S 129th E Ave, Broken Arrow, OK 74012. Masks are required and social distancing will be practiced

Mitchell (Butch) Crawford, passed away on Thursday August 27,2020 after battling COVID-19 for six weeks. He was born to Opie and Lorraine Crawford in Pryor, OK on 12/21/1953. Butch celebrated a successful life contributing to the lives of many... View Obituary & Service Information

The family of Mitchell "Butch" Crawford created this Life Tributes page to make it easy to share your memories.

Send flowers to the Crawford family.