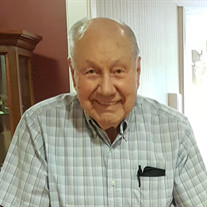 Murrel Edward Cowherd passed away February 14, 2021 in Tulsa, Oklahoma. He was born April 5, 1926 in Hickory Ridge, near Wetumka, Oklahoma. He was the youngest of four sons. Murrel was preceded in death by his parents and heroes, Oscar and Lucinda Cowherd; and three brothers, Earl Cowherd (Rita), Leonard Cowherd (Florence/Christine), and Walter Cowherd (Maxine). He is survived by his wife of 73 years, Helen Cowherd; three sons, Carrol “Sam” Cowherd (Rebecca), Kim Cowherd (Sue), and Kent Cowherd; step grandson, Jason Sims (Ashley); grandson, Kyle Cowherd (Lauren); granddaughter, Jordan Cowherd; two step great granddaughters, Mackenzie Sims and Caroline Sims; great granddaughter, Zorie Cowherd; great grandson, Archer Cowherd; and step great great granddaughter, Kylie Sims. He enlisted with the United States Marines in 1944 and served honorably until 1947. After World War II ended in 1945, Murrel was stationed in Okinawa Japan, where he assisted in the establishment of US military government. He took great pride in his marine heritage and that became an enduring part of his identity. Soon after discharge from the marines in 1947, Murrel met and fell in love with Helen in Wetumka, Oklahoma. They soon married. Shortly after that, he started working for Public Service Company of Oklahoma (PSO) at the Weleetka, Oklahoma power plant as a maintenance helper. His remarkable discipline and drive for achievement helped him to advance rapidly. At his retirement in 1991, he worked at the downtown Tulsa PSO headquarters as Director of Station Operations. At that time (and perhaps still), he was the only PSO employee to progress from an entry level position to becoming a member of the executive management team. Over his nearly 44 year PSO career, Murrel also worked at Northeastern Station in Oologah, Oklahoma and Riverside Station in Jenks, Oklahoma. Murrel served on the school boards of the public school systems of both Weleetka, Oklahoma and Oologah, Oklahoma. He was a strong and consistent advocate for educational opportunity and excellence. An avid sportsman, Murrel particularly loved golfing and quail hunting. He won numerous trophies playing in various amateur golf tournaments over the years. The bird dogs he raised and trained were special to him, and among those, Duke, an English pointer, was his prize. Duke was an excellent hunter, and he possessed a most endearing personality, just as his master did. Murrel was a devout Christian and member of Asbury United Methodist Church in Tulsa, Oklahoma. Shortly after moving from Oologah, Oklahoma to Tulsa, Oklahoma in 1973, he and Helen transferred their membership to Asbury from the First Christian Church in Claremore, Oklahoma, where Murrel had served faithfully as elder for more than a decade. Faith in God was a cornerstone of his philosophy for a successful life, as were service to others and respect for self. He was a staunch defender of his family, which he loved dearly; and he was always eager to share his cherished smile and warm heart. Interment will be February 24, 2021 at Floral Haven Cemetery in Broken Arrow, Oklahoma. A memorial service is not currently planned, but one may be announced at a future date. Donations in Murrel’s honor may be made to Asbury United Methodist Church. 6767 South Mingo Road, Tulsa, OK 74133

Murrel Edward Cowherd passed away February 14, 2021 in Tulsa, Oklahoma. He was born April 5, 1926 in Hickory Ridge, near Wetumka, Oklahoma. He was the youngest of four sons. Murrel was preceded in death by his parents and heroes, Oscar and... View Obituary & Service Information

The family of Murrel Cowherd created this Life Tributes page to make it easy to share your memories.

Send flowers to the Cowherd family.