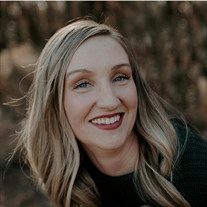 Nicole Faye Ellexson, age 32, passed away October 30, 2020 at Ascension St. John Medical Center in Tulsa. She was born Nicole Faye Paterson on September 2nd, 1988 at Irwin Army Hospital in Ft. Riley, Kansas to Andrew and Christina Paterson. She moved to Rose in 1994 then Locust Grove in 2003. Nicole is a daughter, sister, wife, mother of two, and lifelong friend to many. She spoke softly and didn’t draw attention to herself. She always strove for excellence in everything that she set her mind to. She enjoyed reading, going to the beach, fast roller coasters and spending time with family and friends. Nicole is a born again Christian and is an active member of GUTS church in Tulsa. She attended school in Locust Grove, K thru 12th grade, where she excelled both academically and in sports. Nicole was determined to support herself and started working during high school at Harps Grocery Store, Holiday Inn Express and Dennys Restaurant in Locust Grove. She played basketball and ran track for the Locust Grove Lady Pirates, and graduated as Class President and co/Valedictorian in 2007. After high school she attended Rogers State University in Claremore. She graduated in 2011 with a Bachelor’s of Science in Social Behavioral Sciences. While attending school in Claremore, Nicole started working at the Hard Rock Hotel & Casino in Catoosa, as a waitress. There she met the love of her life, Jake Ellexson in March of 2009. Nicole and Jake welcomed their son Xade into the world in November of 2011. Nicole & Jake married that following year on October 14th, 2012. She then went on to Oklahoma State University in Tulsa, where she studied Communication Sciences and Disorders and graduated in 2015. Nicole gave birth to her beautiful daughter Quinn in May of 2015. She then attended Northeastern State University in Tahlequah. Nicole studied Speech-Language Pathology receiving her Master’s Degree in 2017. Nicole went on to work as a Speech-Language Pathologist for Stein Ancillary Services in Tulsa. Nicole is survived by her husband Jake Ellexson, son Xade and daughter Quinn. Her parents Andrew and Christina Paterson, brother Justin Paterson; his wife Amber & nephew Aiden, Aunt Cathy and Uncle Bill Roberts; cousin Ashley (Evelyn), cousin Thomas; his wife Katelyn (Emma, Caleb), and cousin Courtney. Aunt Mary Anne and Uncle Doug Wheeler; cousins April; her husband John (Greg, Hailey, Rylynn, Zachary) and Nina. Aunt Vel, cousin Spencer; his wife Elysia (Josh, Kaira, Noah) and half-brothers Robert and Cameron Paterson. Also part of Nicole’s family are in-laws Drew and Tami Haley, Brad and DeeAnna Davis, brother and sisters-in-law Zack and Megan Ellexson and sons Malik and Maddyx; Dexter and Ashley Ellexson and Max Ellexson as well as many other beloved family and friends. Visitation will be held from 3-7 p.m. on Friday, November 6, 2020 at Floral Haven Funeral Home. Funeral services will be held at 10 a.m. on Saturday, November 7, 2020 at GUTS Church, 9120 E Broken Arrow Expressway, Tulsa, OK 74145.

The family of Nicole Faye Ellexson created this Life Tributes page to make it easy to share your memories.

Send flowers to the Ellexson family.