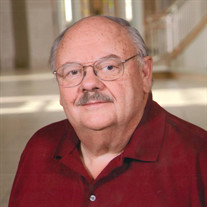 Paul Myers was born August 12, 1942 near Argos, Indiana where he grew up as the son of Kenneth and Tressie Myers. He passed away November 9, 2021 in Tulsa, Oklahoma. He attended Richland Center Schools near Argos and graduated in 1960. He then received a degree in Television Engineering from DeVry Institue in Chicago, Illinois. His work took him all over the United States and Canada during the time he worked for RCA. Paul and his family moved to Broken Arrow, Oklahoma, and he took a job for several years with the Oral Roberts Television Ministry. His last employment before retiring was for 13 years with KOTV Channel Six in the engineering department. Paul loved Asbury Church, and while there he trained as a Stephen Minister. He was active in this Ministry for several years. He also attended the Faithbuilders Community where he was treasurer for several years. In the late 90's as part of the Green Country Emmaus Community Paul served on Kairos weekend workshop teams at Rader Treatment Center and later at Tulsa Boys Home. He was a mentor for several young men. Prior to attending Asbury, Paul was active in the Divorce Adjustment workshops at Christ United Methodist Church in Tulsa. He was also a member of the Phoenix Group at Christ UMC. Paul also loved attending Added Dimensions at First Baptist Church and collected DVDs of many of Darren Spoo's Tuesday messages. Paul had several areas of interest. In his younger years, he ran the Tulsa Run with others from his Runners Group. He liked to work on and fly remote control airplanes. For a time he liked to play golf. He loved movies and music and collected many items in this area. He had a keyboard, a banjo, a guitar, harmonicas, and a Concertina Accordian as well as many DVDs and CDs. He shared his movie collection and was the “Movie Man” at Town Village where he lived almost six years until the end of his life. Paul loved his motor home and RV trips mostly in Colorado and the eastern United States. He was a 17-year member of the St. Stephens United Methodist Church Rainy Day Campers of Broken Arrow who mostly camped in Oklahoma and Arkansas. Paul is survived by his daughter, Pamela Sue Myers, who resides in Rochester, Indiana; a sister Marilyn Miller of Three Rivers, Michigan; a half-brother, Roger Lackey and wife Sharyn of Myrtle Beach, SC; several nephews, nieces and cousins; and his long time friend, Edward Slier of Tulsa. Paul made many positive memories with those who knew him. He will be missed. Celebration of Life Memorial Service will be 12:30 PM, Friday, November 19, 2021 at Floral Haven Funeral Home Chapel. To view the service via webcasting use the link below: http://webcast.funeralvue.com/events/viewer/63905/hash:3481D0369600EF2B

Paul Myers was born August 12, 1942 near Argos, Indiana where he grew up as the son of Kenneth and Tressie Myers. He passed away November 9, 2021 in Tulsa, Oklahoma. He attended Richland Center Schools near Argos and graduated in 1960. He... View Obituary & Service Information

The family of Paul Howard Myers created this Life Tributes page to make it easy to share your memories.

Send flowers to the Myers family.