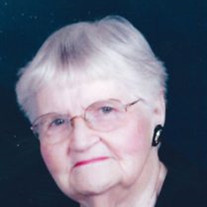 Phyllis Josephine Stewart was born on May 23, 1927 in Eric, Oklahoma to Oddessie and Euna Wileman. She was the first born daughter of 3 children including Catherine Joyce and Elizabeth Joan. The Wileman family moved to Topeka, Kansas where she met her future husband, Edward Stewart , their senior year and both graduated from Topeka High School. The Wileman family then relocated to Lubbock, Texas while Edward Stewart joined the Armed Services during World War II. On leave during his tour of duty, they were married on March 29, 1948. Once he completed his military service, the couple moved to Amarillo, Texas where they increased their family to include Linda and Jim shortly before moving to Abilene, Texas.Phyllis was a loving homemaker taking great care of her family and her beloved dogs. She was a good cook, fun, witty,creative, and artistic. Her passions included painting , teaching art lessons in her home, crocheting, reading, working crossword puzzles, genealogy, and planting flowers and vegetables in the garden. Phyllis also took pleasure on vacations spending time with other family members. She enjoyed traveling each year to Topeka, Kansas as well as camping trips to lakes and parks in Texas and New Mexico.Phyllis and her family were long time members of the United Methodist Church. She was a member of the Abilene Fine Arts Museum, Big Country Arts Association, and the Texas Fine Arts Commission. She had a solo art show at the Creative Arts Club and was named the Artist of the Month in September of 1979. She was a member of the Garden Club and was involved in judging flowers at competitions. She also enjoined entering food and personal paintings in the West Texas State Fair, often resulting in numerous prize ribbons. Some years she also participated as a judge in the food and art competitions.They also resided in Waco,Texas; Albuquerque, New Mexico, and later retired to Lubbock, Texas. Phyllis and her husband were  leaders of the Genealogy Club at the Lubbock Library helping others research their family origins, as well as, creating extensive genealogy records for all the generations of our family to enjoy. Also they were active members of St. Luke’s United Methodist Church in Lubbock, Texas before relocating to Broken Arrow, Oklahoma to be close to their daughter and son-in-law.Phyllis is survived by her husband of 73 years, Edward Stewart of Broken Arrow, Oklahoma; sister, Beth Morrisett of San Marcos, Texas; daughter and son-in-law, Linda and Ron Dix of Broken Arrow, Oklahoma; and granddaughter, Kendra Stevens, of North Richland Hills, Texas. She is preceded in death by her son, Jim Stewart and sister, Joyce Raymer.Phyllis was loved by many including her nieces, nephews, and granddaughter. They loved her creative spirit and have fond memories of doing arts and craft activities with her. She brought love, laughter, warmth, and the spirit of the Lord to our family. She will be dearly missed. Phyllis now resides in our hearts forever.

Phyllis Josephine Stewart was born on May 23, 1927 in Eric, Oklahoma to Oddessie and Euna Wileman. She was the first born daughter of 3 children including Catherine Joyce and Elizabeth Joan. The Wileman family moved to Topeka, Kansas where she... View Obituary & Service Information

The family of Phyllis Josephine Stewart created this Life Tributes page to make it easy to share your memories.