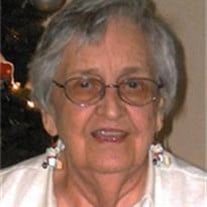 Reba Imogene Hisaw Moss, known to all who loved her as â??Granny,â? passed away on Monday, January 23, 2012.Â  Reba was born in Tamaha, Oklahoma, on July 28, 1922, to Retta Mae and William Jackson Hisaw. Reba married her childhood sweetheart, J.D. Moss in 1938, and they enjoyed 66 wonderful years together before his passing in 2004.Â  Reba was truly an amazing and selfless woman who lived her life with a deep and unwavering faith and love for her family. Reba lived a life filled with dignity and respect for all those around her. She was happiest when surrounded by her three children, grandchildren, and her many great-grandchildren, all who filled her life with joy. During the latter part of WWII Reba and J.D. lived in northern California. Â In 1951 Reba went to work for Pacific Bell Telephone. Two years later she transferred to Southwestern Bell in order to return to their beloved Oklahoma.Â  Rebaâ??s career spanned over 25 years beginning as an operator and rising to a management position.Â  She retired in 1976, and was a proud member of the Bell Telephone Pioneers.Â  After her retirement, she and J.D. moved to their new dream home, built by J.D. himself, on Ft. Gibson Lake. They enjoyed life there for over 25 years before moving to Burgundy Place in Tulsa, where she resided until the time of her passing. Reba and J.D.â??s home was always the gathering place for special occasions. In addition to being a wonderful cook, Reba was an avid reader and also enjoyed crocheting, quilting, gardening, and crossword puzzles.Â  Reba was extremely proud of her Cherokee heritage and was always seeking knowledge about this part of her family history. Â Â Â Â Â Â Â Â Â  Reba was preceded in death by her loving husband J.D., her brother Jackson Hisaw, and her sister Wanda Hisaw Stowe. Â Â Â Â Â Â Â Â Â  Reba is survived by her three children, Carol Dick of Tulsa; Roger Moss and his wife Sharon of Coweta; and Loretta Harrison and her husband Bill of Tulsa. Her grandchildren, Mark Harrison and his wife Tina of St. Louis, MO; Tamara Benson and her husband Steve of Jenks; Leslie Bradshaw and her husband Mike of Oklahoma City; Mike Moss and his wife Tammy of Overland Park, KS; Karen Holt and her husband Brock of Jacksonville, FL; Robert Dick and his partner Tom Fulkerson of Atlanta, GA; Leigh Ann Moss and her husband Dr. Eric Sherburn of Tulsa; and step-grandchildren, Rick Douthat and Diane Douthat and her husband Charles, all of Tulsa. Her great-grandchildren: Geoffrey Harrison and his wife Sara; Molly and Patrick Benson; Spencer and Elliott Hollaway; Adrian and Trevor Holt; Hallie and Sadie Moss; Madeleine, Claire and Henry Sherburn, and J.G., Maria, Hannah, and Will Douthat. Grannyâ??s generosity and unconditional love for her entire family will never be forgotten. In Rebaâ??s memory you may make a donation to the charity of your choice. Services are Friday, January 27, 2012 at 10 AM at Floral Haven in Broken Arrow.

Reba Imogene Hisaw Moss, known to all who loved her as â??Granny,â? passed away on Monday, January 23, 2012.Â  Reba was born in Tamaha, Oklahoma, on July 28, 1922, to Retta Mae and William Jackson Hisaw. Reba married her childhood sweetheart,... View Obituary & Service Information

The family of Reba “Granny” Hisaw Moss created this Life Tributes page to make it easy to share your memories.