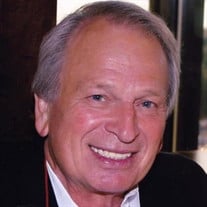 Richard Eugene Garmaker was born October 29, 1932 in Hibbing, Minnesota to Sophie and Martin Garmaker. He graduated from Hibbing High School in 1950. Richard attended Hibbing Junior College through 1952, where he earned All-American honors on his basketball team that went on to win a runner-up status at the National Junior College Tournament. Richard was awarded a University of Minnesota athletic scholarship and proceeded to play basketball there for two years. During that time, he achieved Big Ten All Conference honors, along with being a consensus All-American selection in 1955. Upon graduation, Richard married fellow graduate, Darlene Rahja, who was his childhood sweetheart. Richard was a member of the Sigma Alpha Epsilon Fraternity, the University of Minnesota “M” Club and a member of the Iron Wedge Society. Upon graduation, Richard was selected by the Minneapolis Lakers as their territorial draft choice, where he played for five years and became a four time NBA All Star. Richard was traded to the New York Knickerbockers one week after the life threatening landing of the Laker airplane in an Iowa cornfield in 1959 and finished his career in 1961. The Minneapolis Lakers subsequently became the Los Angeles Lakers. Two sons were born, Steven in 1961, and Stuart in 1963 and home was in and around Minneapolis, until moving to Naples in 1979. In 1991, Richard and Darlene moved to Tulsa, Oklahoma, where Richard joined his son, Stuart, who was in the oil and gas production business. In January 1997, Richard was inducted into the University of Minnesota Hall of Fame and in February 2011 his University jersey number 53 was officially retired. Richard lost his oldest son, Steven in 2015 and is survived by his loving wife, Darlene Garmaker, son Stuart Garmaker and his wife Judy, grandson Grayson Garmaker, daughter-in-law Denise Garmaker, sister-in-law Virginia Rahja, sisters Joni O’Neil and Jeanie Barto and brother Tom and his wife ZuHui. No Services are planned at this time. Friends and Family may send their condolences to www.floralhaven.com In lieu of flowers, the family would like any memorial donation to be made to a charity of your choice.

The family of Richard Eugene Garmaker created this Life Tributes page to make it easy to share your memories.

Send flowers to the Garmaker family.