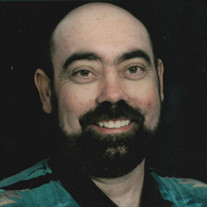 Richard Leon Hutchinson, 56, resident of Tulsa, Oklahoma passed away August 14, 2021. Richard was born May 17, 1965 in Tulsa, Oklahoma to Kenneth and Kathryn Hutchinson. He enjoyed spending time outdoors; especially hunting and fishing. He loved listening to music by the Eagles. Most of all he loved his family. Richard worked as a welder and then in 2014 went to work at Walmart in 2014. He was a devoted son, husband, father, grandfather and friend. He will be missed by everyone who knew and loved him. Richard was preceded in passing by his grandparents; his father, Kenneth Leon Hutchinson and his brother, Gary Hutchinson. Richard is survived by his mother, Kathryn Elaine Hutchinson (Buley); his wife, Linda Ann Hutchinson; son, Joshua Hutchinson and his spouse, Tiffany; daughter, Mary St. John and her spouse, Dana; grandchildren, Hunter, Ryder, Jaxon and Emma Hutchinson; sister, Sandra Munos and her spouse, Pablo; brother, Tommy Hutchinson and his spouse, Penny and numerous nieces, nephews, family members and friends. Celebration of Life Service will be 11:00 am, Saturday, September 18, 2021 at Owasso First United Methodist Church. Rev. Andy Henson will be officiating the services.

The family of Richard Leon Hutchinson created this Life Tributes page to make it easy to share your memories.

Send flowers to the Hutchinson family.