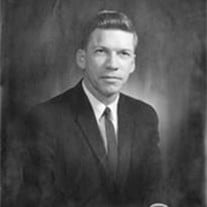 Richard W. “Dick” Mudge, was born May 17, 1922 in Kansas City, Kansas to Sewell and Vera Mudge.Â  He graduated from Paseo High School class of 1942, Kansas City Missouri.Â  Dick wasÂ  aÂ  Boy Scout as a young man,and attained the rank of Eagle Scout.Â  He joined the Navy in 1942, retiring in 1982 as a Lt. Commander.Â  Dick graduated from the University of Kansas City in 1948.Â  He married the love his life Ruth E. Weaver February 11, 1949 and they moved to Tulsa where they celebrated their 62ndÂ  Anniversary in 2011.Â  Dick worked forÂ  Spartan and was Vice PresidentÂ  of Century Electronics.Â  Their daughter, Cindy was born in Tulsa, May 31, 1957. The Mudge family then moved to Broken Arrow in 1968 and startedÂ  Tri-M-Ranch where they raised quarter horses for show in 4-H and AQHA.Â  Dick was President and General Manager of Ajax Die Casting and Plastics, Broken Arrow until his retirement.Â  He served the Broken ArrowÂ  community most of his life.Â  He held memberships with the Broken Arrow Boys Club Advisory Board, Broken Arrow Chamber of Commerce, Franklin Memorial Hospital Board, St. Francis Broken Arrow Board, Metro Bank Board, Meals on Wheels, Red Cross and was Broken Arrow Citizen of the year, 1985.Â  Dick lived his life in the service of others, and was a man of honor and integrity, and was a hero to his family.Â  He loved his family and is survived by , his loving wife Ruth, his daughter Cindy Mudge White,Â  his wonderful grandchildren whom he adored, granddaughter Jessica Hart and her husband Kevin, and his grandson James Richard White.Â  There will be private visitation for family only, with public funeral servicesÂ  3 p.m. Friday in the Floral Haven Funeral Home Chapel with military graveside services to follow in the Veterans Field of Honor, Floral Haven Memorial Gardens.Â  Friends are asked to donate in his memory to Clarehouse, The American Red Cross, and to the Veterans ofÂ  Foreign Wars.

The family of Richard W. Mudge created this Life Tributes page to make it easy to share your memories.