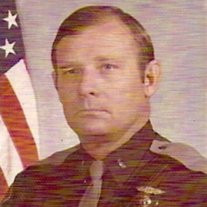 Richard Stanley Wiseman beloved husband, father, and grandfather went home to be with the Lord on Friday, March 8, 2013 after a long illness. Born November 23, 1928 in Bristow, Oklahoma, Richard spent his childhood there and during high school would meet and eventually marry his true love, Wanda (Hill) Wiseman in 1946. Their love and devotion to each other has been unmistakable over the past 66 years. In 1948 they had their only child, Sharon, who was the pride and joy of his life. After learning the carpenter trade Richard achieved his life’s ambition by being accepted into the Oklahoma Highway Patrol in 1958. Richard had a distinguished career in the patrol rising to the rank of Lieutenant, with the honor of working as personal security for three governors where he served as head of security for Governor David Hall. After retiring from the patrol in 1979 he and Wanda returned to Tulsa to be closer to their daughter and grandchildren where he worked as Security Officer for United Bank of Tulsa and then drove cars for Jackie Cooper Imports. While he enjoyed many wonderful life experiences his best and most cherished ones were with his family. “Papa”, as he was affectionately called, will be greatly missed, but we know he now has a special place prepared just for him by his Lord and Savior in heaven. Richard is survived by his wife Wanda of Tulsa, daughter Sharon and husband Richard Wilkinson of Tulsa, three grandchildren, Shannon Wilkinson of Tulsa, Lori (Wilkinson) Wise and husband Brent of Haskell, Chris Wilkinson and wife Jaye of Vinita, four great grandchildren, Gabrielle Wise, Okmulgee, Jacob Wise and Grace Wise, Haskell, and Ava Wilkinson, Vinita and one great great grandson, Mason Wise. He is preceded in death by his father and mother, James M. and Almeda Wiseman, one brother, Arlie Wiseman, and three sisters, Ruby Sisson, Cordie Brown, and Alice Lane.

Richard Stanley Wiseman beloved husband, father, and grandfather went home to be with the Lord on Friday, March 8, 2013 after a long illness. Born November 23, 1928 in Bristow, Oklahoma, Richard spent his childhood there and during high school... View Obituary & Service Information

The family of Richard Stanley Wiseman created this Life Tributes page to make it easy to share your memories.