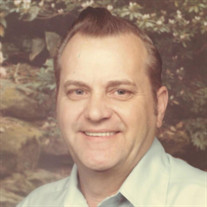 Robert “Bob” Lee Ezzell was born in Dawson, Oklahoma on June 6, 1932 to Erving Robert Ezzell and Gertrude Talley Ezzell. He passed from this life and into the arms of his loving Lord and Savior on February 6, 2022. He was 89 years old. Bob graduated from Central High School in Tulsa in 1950. He entered the workforce as a teenager working at the Rialto Movie Theatre, selling “roastin' ears” corn, and then driving an ice cream truck where he met the one he would eventually call his “beautiful bride," Janeice. Jan was living with her family and their house was on Bob’s route. Jan would occasionally ride along in the truck with her three younger siblings enjoying all the ice cream they could eat. Bob would joke, “I didn’t make much money when they rode along,” but we know he enjoyed every minute of those times. He was later invited by a Tulsa Builder to learn electrical work wiring new houses. Bob impressed his mentor with how quickly and efficiently he learned all that he was taught. He then began his lifelong career as a Journeyman Electrician. In the days before the internet when someone needed help with any electrical work, you would call upon those you knew, and there were many family, friends, neighbors and church members who called upon Bob. Everyone knew he would always show up and do a job that was perfect in every detail. That was just the kind of man he was. Bob was a faithful member of Northside Christian Church since 1959. Throughout his life he served in many different volunteer roles. He even had blueprints of every Northside church building and renovation so when he was called upon he would know exactly what was needed and where to go. He served as Deacon, Building and Grounds Maintenance, and eventually a Guest Services Greeter where he would greet each person who entered the doors of the church with a firm handshake and a smile. Even after he could not stand up for long because his legs were weak, he would sit in a chair and continue greeting. He was a member of the church bowling league and played on the Men's Softball Team. Many trophies on his fireplace mantle still testify to the years they excelled in league games. He was an avid sports fan, but he loved OU Sooner football and girls softball the most. He also enjoyed woodworking and smoked barbecue bologna and he had a special way of saying, “ooo that’s gooooood!” Bob was a member of the International Brotherhood of Electrical Workers (IBEW) for 50+ years. He retired at the age of 62, and soon after he and Jan became members of Broken Arrow Sams which is a group of people who travel together in RV’s and go camping. They spent 20 years traveling and enjoying fellowship, games and food with their fellow campers. When Bob and his “beautiful bride” Jan were married on November 11, 1971 at Northside Christian Church, his family immediately expanded from a dad with 2 girls to a family with a wife and 6 girls. He never complained about all the activity a house full of women could create. Instead, he was a loving, faithful and generous provider and head of the household. He was often seen reading his evening newspaper when a daughter would bring a new boy to meet their dad. Bob and Jan celebrated their 50th Wedding Anniversary surrounded by many friends and family just last year. We are all very grateful for the years we shared with him on this earth. He was preceded in death by parents, Robert and Gertrude Ezzell, sisters Marie Sherman and Mary Simons, brother John Ezzell, and daughter Sherri Haney. He is survived by his wife, Jan, children Daneice Curcuruto, Jeanie Conley, Teresa Buchan and husband Scott, Tammy Ekiss and husband Kevin, and Janet Sullivan. He was always so proud of his 13 Grandchildren: Nicole Potter and husband John, Michael Wooten and wife Tiffany, Laurie Wooten, Andrew Conley and wife Alyse, Joey Tidalgo and husband Joshua, Sara Fluharty and husband Stephen, Travis Buchan and wife Lorre, John Curcuruto, Steven Conley and wife Stephanie, Courtney Vernon and wife Brittany, Stormie Hatten, Danae Crane and husband Matt, and Dillon Sullivan. He often boasted of his 20 Great Grandchildren: Colton Potter and wife Brittany, Austin Potter, Braden Potter, Emry Wooten, Abigail Wooten, Jake Wooten, Levi Wooten, Jacee Wooten, Ebenezer Conley, Levi Conley, Miles Conley, Stella Fluharty, Sadie Fluharty, Scarlett Fluharty, Sophie Fluharty, Baby Fluharty, Lane Buchan, Diego Hatten, Oliver Hatten, and Zayla Crane. And he even had 4 Great Great Grandchildren: Andy Potter, Coleman Potter, Violet Potter, and Beau Potter. Visitation will be held from 1-5 p.m. on Sunday, February 13, 2022 at Floral Haven Funeral Home. Funeral services will be held at 12:30 p.m. on Monday, February 14, 2022 at Northside Christian Church in Broken Arrow, Oklahoma. Burial will follow at Floral Haven Memorial Gardens. In lieu of flowers, please make a memorial in Bob's name to the Wounded Warrior Project, by going to: https://support.woundedwarriorproject.org/ and click on Donate Now.

Robert &#8220;Bob&#8221; Lee Ezzell was born in Dawson, Oklahoma on June 6, 1932 to Erving Robert Ezzell and Gertrude Talley Ezzell. He passed from this life and into the arms of his loving Lord and Savior on February 6, 2022. He was 89 years... View Obituary & Service Information

The family of Robert "Bob" Ezzell created this Life Tributes page to make it easy to share your memories.

Send flowers to the Ezzell family.