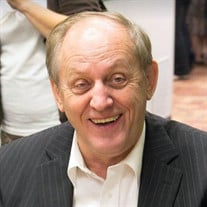 October 20, 1950 – December 27, 2020 Robert “Bob” Leroy Lutz, 70, of Tulsa, Oklahoma, joined the loving arms of his Savior on December 27, 2020, at St. Francis Hospital, due to COVID-19 complications. Bob was born on October 20, 1950, in Mobridge, South Dakota, to William and Ida (Aldinger) Lutz and sister, Barb. Later he became an older brother to two more siblings: Debbie and Rick, and eventually the family moved to Rapid City, SD, where he graduated high school. While attending Bob Jones University in Greenville, South Carolina, Bob met the love of his life, Barbara “Barb” Staley. They married on June 23, 1973, in Lima, Ohio, at Lima Baptist Temple. Together, they moved to Rapid City, South Dakota, where Bob worked at Mayflower Moving Company and graduated with a degree in Business Education in 1974. In 1975, Bob and Barb moved to Denver, Colorado, where he taught accounting and bookkeeping at Silver State Baptist School. During his summers off, Bob worked for Sears Home Delivery. While teaching, he made an impression on many young minds and became a beloved teacher. Also during those years, he and Barb became parents to three children: Todd, Stephanie, and Ryan. Following his teaching of 7 years, Bob then became a full-time manager at Sears, where he was known for his excellent work ethic and his impressive navigating capabilities. At this time, a fourth child, Rachel, was born to Bob and Barb. After living in Denver for 29 years, Bob and Barb, as well as Rachel, relocated to Tulsa, Oklahoma, in 2004, for a job transfer. Upon arrival, Bob and his family became active members at Eastland Baptist Church in Tulsa. Besides loving his family, serving his church community, and working energetically, Bob enjoyed reading and watching Westerns, as well as avidly participating in game night. He will fondly be remembered for his quick wit, funny jokes, abundant knowledge of trivia, and enthusiasm for life. Also, remembered will be his love and desire to help those in need. He is survived by his wife, Barb, of 47 years; their four children: Todd (Jessica) Lutz of Bennett, Colorado; Stephanie (Brooks) Stoodt of Pensacola, Florida; Ryan (Erika) Lutz of Lakewood, Colorado; Rachel (Tyler) Schultz of Tulsa, Oklahoma; 14 grandchildren; 3 great-grandchildren; 2 sisters: Barb Meyer (Sioux Falls, South Dakota) and Debbie Uhler (San Antonio, Texas); 1 brother, Rick Lutz (Golden, Colorado); several nieces, nephews, and other relatives. Preceded in death were his father, Bill, and mother, Ida. Definitely cut too short, Bob’s life will be dearly missed by all those who knew him, but especially by his family and his church family ‒ with whom he cheerfully and faithfully served the Lord. All glory be to Christ. A memorial service will be held at Eastland Baptist Church at 1835 South 129th East Avenue Tulsa, Oklahoma 74108 on December 31, 2020, at 11:00 a.m. In lieu of flowers, the family asks that donations be made to the Helping Hands Ministry of Eastland Baptist Church.

The family of Robert Lutz created this Life Tributes page to make it easy to share your memories.

Send flowers to the Lutz family.