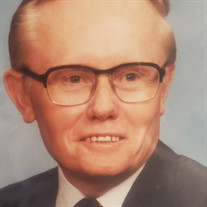 Robert Lowell Marks passed away November 9, 2021 in Tulsa, Oklahoma. He was born July 3, 1925 in Leon, Kansas. The son of Arthur L. and Audrey M. Marks, he attended public schools in Arkansas until January 1944, the middle of his senior year, when he was drafted for United States Army service. During his infantry service in Belgium in the Battle of the Bulge he was wounded thus receiving his first Purple Heart. After recovering in a Wales hospital, he went back to Germany to serve in occupation duties before returning home and on to college. A short time after the end of World War II the War Department awarded the Bronze Star with the “V Device” to all soldiers who participated at the regimental level or lower in the Battle of the Bulge in Belgium. Bob was called to active infantry duty in Korea during his senior year of college. After being wounded a second time he was awarded a second Purple Heart and promoted to the rank of Sergeant First Class. Bob returned home for a few weeks of recuperation before finishing his mathematics/science teaching degree. After having taught in public school for a short time, Bob returned to college using the GI Bill and earned his Master’s Degree in Education. He is credited with 34 years public teaching experience in Arkansas and Oklahoma. Bob’s first wife Ruth Marie Marks (nee Kilburn) passed away in 1977. She was the mother of Robert Lynn Marks, son of Robert Lowell Marks. Bob married Patricia Ann Summers in 1984. She passed away in 2014. After retiring from the Tulsa Public Schools, Bob spent 18 years helping the elderly and needy citizens with income tax filing and working with Scouts BSA. He served as the Americanism Officer in the Military Order of the Purple Heart for five years. Bob and Patricia also traveled extensively in the United States and Western Europe during retirement. Immediate family members are son Robert and Marlene Marks and their twin sons Isaac and Christian, all of Belton, Missouri; daughter Julie Summers and her spouse Gina Woods of Muskogee, Oklahoma; daughter Laura and Rod Walton and their daughters Rachel Walton, Becca Walton, Hayley Walton, and son Will Walton all of Bartlesville, Oklahoma. Bob also is survived by a sister-in-law, Betty Marks, who lives in Michigan. Visitation will be held on Sunday, November 14 from 12 pm - 5 pm (with family present from 3 pm - 5pm) at Floral Haven Funeral Home. Graveside services will be held at 2 pm on Monday, November 15 at Floral Haven Memorial Gardens- Veteran's Field of Honor Pad. Memorial services will be at 3 pm on Monday, November 15 at Asbury United Methodist Church.

Robert Lowell Marks passed away November 9, 2021 in Tulsa, Oklahoma. He was born July 3, 1925 in Leon, Kansas. The son of Arthur L. and Audrey M. Marks, he attended public schools in Arkansas until January 1944, the middle of his senior year,... View Obituary & Service Information

The family of Robert "Bob" Marks created this Life Tributes page to make it easy to share your memories.

Send flowers to the Marks family.