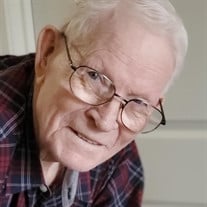 Roger A. Wilson, 92, of Tulsa, Oklahoma, passed away on May 21, 2021 at his residence. He was born on May 24, 1928 in Catoosa, Oklahoma to Calvin and Minnie Wilson. Roger attended school in Catoosa, OK until 7th grade before moving to Broken Arrow where he graduated in 1948. He went to Bacone College for two years before going to Korea and serving with the Second Infantry Division for two years. After the Army he began working for Sinclair Oil Company which later became Atlantic Richfield (ARCO) until he retired from ARCO after 35 years and returned to Broken Arrow in 1989. He was an artist, jewelry creator, and woodworker, and most importantly a kind-hearted gentleman. He enjoyed traveling and spending time at Lake Tenkiller. Roger was preceded in death by his parents and his 7 sisters. He is survived by his wife of 24 years, Betty Powers-Wilson; 3 children-Terri Bush and husband Ron of Dougherty, TX; Chris Wilson and wife Michelle of Broken Arrow, OK, Corey Wilson and wife Stephanie of Broken Arrow, OK; and one step-daughter, Vicki Haefele of Broken Arrow, OK. Grandchildren include Andrea Cunningham of San Antonio, TX; Zac Cunningham of Ft Huachuca, AZ; Chase Wilson and wife Amanda of Kansas City, KS; Ben Wilson of Ft. Morgan, CO; Andrea Schafer and husband RJ, Ethan Wilson and Jared Wilson of Broken Arrow, OK. Great-grandchildren include Tate Schafer, Ayla, Ian and Christian Cunningham, Stella and Callie Wilson. A funeral service will be held to celebrate this wonderful man at Floral Haven 12:30 p.m. on Monday May 24, 2021 (which is Roger's 93rd birthday). In lieu of flowers the family would appreciate donations to be sent in his name to “The Museum Broken Arrow” (400 S. Main Street, Broken Arrow, Oklahoma 74012) to help continue telling the story of the local community. *Services will be live streamed starting at 12:15 PM on Monday, May 24, 2021. To view the service live, please click on the following link: https://webcast.funeralvue.com/events/viewer/54503/hash:3B6E0F199F0A3D73

Roger A. Wilson, 92, of Tulsa, Oklahoma, passed away on May 21, 2021 at his residence. He was born on May 24, 1928 in Catoosa, Oklahoma to Calvin and Minnie Wilson. Roger attended school in Catoosa, OK until 7th grade before moving to Broken... View Obituary & Service Information

The family of Roger Wilson created this Life Tributes page to make it easy to share your memories.

Send flowers to the Wilson family.