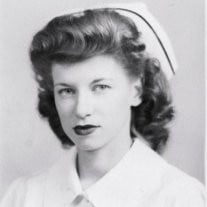 The Lord called for Rosemary in the early morning of January 19, 2013 in the presence of her husband of 67 years, Donald E. Griffith, her son Steve Griffith, and his wife, Janet. Rosemary was born on Wednesday, June 10, 1925 at Muskogee General Hospital along with her twin brother Charles Belcher. She was one of five children of Claude Houston Belcher and Elda Opelia Belcher of Muskogee, Oklahoma.She grew up in Oklahoma and Arkansas graduating from the State Vocational School, Huntsville, Arkansas in 1943. She attended and graduated from St. Maryâ??s Hospital School of Nursing in Winfield, Kansas as a Registered Nurse in May 1946. Following her graduation she married Donald E. Griffith, a newly commissioned 2nd Lieutenant of the United States Army Air Corp on July 27, 1946.Following their marriage, she worked as a private duty nurse in Winfield, Kansas, then as a surgical nurse at St. Josephâ??s Hospital of Denver, Colorado, and as an epidemiology nurse at Hillcrest Medical Center, Tulsa, Ok. Then, upon relocation to Seoul, South Korea, she was a Red Cross Volunteer for the Mobil Blood Unit of the 8th United States Army before joining the 121st Evacuation Hospital. She is also a member of the 38th Parallel Nurses Society, 8th United States Army. Upon returning to the United States, she joined the American Red Cross in Tulsa where she supervised many blood drives until her retirement.She and her husband are long time Church of Christ members in Tulsa and wherever they lived in the United States as well as in Seoul, South Korea. She and her husband have enjoyed extensive international travel, lake living, and both were long time volunteers for St. Francis Hospital in Tulsa. At the hospital she logged almost 2,000 hours of service in the critical intensive care unit (CICU) before retiring last year.Her life time professionalism, compassion, and sympathy will be missed by many.She was preceded in death by her parents, Claude Houston Belcher and Elda Opelia Belcher, a brother, Michael Belcher of West Richland, Washington, and her son, Douglas Griffith of Tulsa. Surviving family members are her husband Donald E. Griffith, son Steve Griffith and wife Janet of Broken Arrow, granddaughters Amy McHugh and husband Rhett of Bixby, Ok, Becky Schulke and husband Christian of Temple, Tx. Great grandchildren Collin and Cameron McHugh, Lily and Levi Schulke. Brothers, Dr. Charles Belcher of Hilo, Hawaii, Dave Belcher of Yuma, Arizona, and Phil Belcher of Pasco, Washington. In addition, numerous nieces and nephews and a close family friend, Ami Thomason of Broken Arrow.Floral Haven is coordinating the services. The funeral service is being held at the Church of Christ at 2901 South Yale, Tulsa, Oklahoma on Saturday, January 26, 2013 at 10:00 AM. Graveside services will be conducted at the Highland Cemetery in Winfield, Kansas at a later date.

The Lord called for Rosemary in the early morning of January 19, 2013 in the presence of her husband of 67 years, Donald E. Griffith, her son Steve Griffith, and his wife, Janet. Rosemary was born on Wednesday, June 10, 1925 at Muskogee General... View Obituary & Service Information

The family of Rosemary Belcher Griffith created this Life Tributes page to make it easy to share your memories.

The Lord called for Rosemary in the early morning of January...