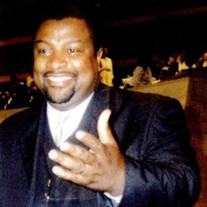 Pastor Roy Kevin Brown, 55, Tulsa, OK, transitioned peacefully on Sunday, January 2, 2022 at St. John’s Hospital. He was known to his parents and siblings as Roy Kevin. Born in New Orleans, LA, he moved to Tulsa to attend bible college. Upon completion of bible college, he moved to a mountainous Caribbean island, Montserrat. Years later, he returned to Tulsa and made it his permanent residence.He was a graduate of Francis T. Nichols High School, New Orleans. He never missed a day of school. He gave his life to Christ at the age of 16, and became a serious student of the word of God. Roy dedicated many hours of daily studying, and being taught the word of God by the elders of his church. He really enjoyed animals and worked at a veterinarian clinic while in high school. Upon graduation, he attended Xavier University, New Orleans, where his mother was the university’s head librarian. While attending college, he attended an annual Pentecostal conference in Tulsa. Roy eagerly returned to New Orleans, but had his sights set on making Tulsa his home. He traveled to Tulsa several times, and spent a summer in Tulsa where he reconnected with Elder and Pastor Black of Greater Grace church. Roy was 18 at the time, and moved to Tulsa with two of his close friends from New Orleans. Once he arrived in Tulsa, he landed a position at Oral Roberts University. He utilized the benefits and took several courses while working there. He met Floyd Jordan in an elevator while on the job. Roy was on fire for Christ! He said to Floyd (who was a complete stranger at the time), “I just have one question that hasn’t been answered”. The stranger, Floyd said, “What’s the question?'' Roy said, “Are you ready to be born again”? Floyd answered, “I was born ready”. They laughed and became friends. Roy wanted to see people saved and serving Christ. If he could make someone else's life better, he did just that. Roy was offered a better employment opportunity, and shared it with his friend Floyd. They both were hired at Trigen Energy, Tulsa. He later enrolled in Rhema Bible college, Tulsa. He was asked by Elder Black to put his schooling at Rhema on hold, because he was needed at Greater Grace. The time that he devoted in his earlier years of his Christian walk with the Lord, studying the word, and being a teachable student was being put to much use at Greater Grace. Under the leadership of Elder and Pastor Black, Minister Brown was given various responsibilities. He taught many classes to adults, filled in during the absence of the pastor and he was Youth President of the Pentecostal Assemblies of the World Organization (PAW). After serving for a period at Greater Grace, he returned to continue his schooling at Rhema. Upon completion of his schooling at Rhema, he was ordained by New Destiny Fellowship International. Pastor Brown was asked to take a position in Montserrat. Several of his fellow pastoral friends thought he was living in abject poverty. He would humbly take the jokes, because he knew something completely different. While in Montserrat, he had a personal chef, lived at a relaxed pace and had a church family he came to love. Pastor Brown would zealously witness to everyone, young and old who came across his path. Unfortunately, the eruption of a volcano destroyed the Southern part of the island. Pastor Brown packed up and returned to Tulsa where he founded the Community Apostolic Church. After serving as Pastor of the church for several years, he reluctantly stepped down due to health reasons (ALS) to focus on receiving the manifestation of his healing. Regardless of his health, his desire was to be in church as much as possible. He attended Church on The Move, Tulsa. Pastor Brown would also attend Rhema Healing School for morning and afternoon sessions.He didn’t care about one’s status or ethnicity. He simply saw a person that had a soul. He knew that every person would spend an eternity somewhere.He wanted that somewhere to be with Jesus Christ. He was preceded in death by his father, Roy J. Brown. Surviving are his wife, Keyah Brown; his children, Roy Joshua Brown, Tulsa, and Quincy Brown and Raquelle Brown both of the home; his mother, Esther Brown, Tulsa; two brothers, Gary Brown (Addie), Louisiana; Pastor Rudelle Israel Brown (Pastor Terry), Tulsa; and two sisters, Kim Benson (Danny), Hawaii; and Tiffany Palmer (William), Tulsa; a niece and nephews; and close family friends. Acknowledgements The family wishes to express their sincerest appreciation to all for the kindness demonstrated in prayer and deed during our time of bereavement. May God bless each of you. Visitation will be held Thursday, January 13, 2022, 9:00 AM - 6:00 PM, at the Floral Haven Funeral Home Visitation Suites in Broken Arrow, Oklahoma. A Celebration of Life Service will be held Friday, January 14, 2022, 10:00 AM at the Floral Haven Chapel in Broken Arrow, Oklahoma. For those that cannot attend webcasting is available at the following link: https://webcast.funeralvue.com/events/viewer/66948/hash:DCE980370DF6088C

The family of Roy Brown created this Life Tributes page to make it easy to share your memories.

Send flowers to the Brown family.