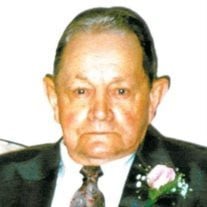 Roy Houston Yarborough was born April 26, 1914 in Dill City, Oklahoma. His parents were Sam Houston Yarborough and Chloa A. (Scott) Yarborough. Roy had an older brother, Joe Elva, and two younger sisters, Lola Athene (Yarborough) Allen and Frances Ruth (Yarborough) McBride. Roy attended school in Butler and Clinton, Oklahoma. Later, Roy went to work for an uncle in Oklahoma City at the Williams Candy Company. It was there that he met his future wife, Farrah Belle Tice. They married on August 29, 1936, one of the hottest summers on record, and they remained married for 63 years. The marriage produced four children: JoAnn (Yarborough) Newland, born on 1/18/1939, Janice Marie (Yarborough) Brown, born on 10/30/1942, Joyce Kay (Yarborough) Mayberry, born 1/28/1948, and died 5/18/1968, and Roy Lee Yarborough, born 3/22/1953, died 9/8/2008, also 8 grandchildren and 12 great-grandchildren. In the early years, Roy worked as a fireman and drove a truck for the Wortz Cracker Company. The family moved to Jenks, Oklahoma in 1955 and Roy went to work for M&M Lumber Company, working there until he retired. Roy was a member of First Baptist Church in Jenks. Roy loved gardening and also the challenge of raising a calf. Sharing his produce was what he really enjoyed as he was a man that never met a stranger and enjoyed people from all walks of life. He will be best remembered for his sense of humor.

The family of Roy Houston Yarborough created this Life Tributes page to make it easy to share your memories.